The head of Canadian software firm Dye & Durham Ltd. said he still believes the company will complete a $3.2 billion (US$2.5 billion) deal for Australia’s Link Administration Holdings Ltd. despite market volatility and the meltdown in technology stocks.

Dye Chief Executive Officer Matthew Proud said Friday that although there remains a risk that the deal will be rejected by regulators, “nothing in our view has changed” since the two companies announced the all-cash agreement in December. They expect to close in August.

“We signed a contract with them, we have the money,” Proud said in a phone interview. “But for some regulator stopping the deal, which we don’t think is going to happen, we have to close.” 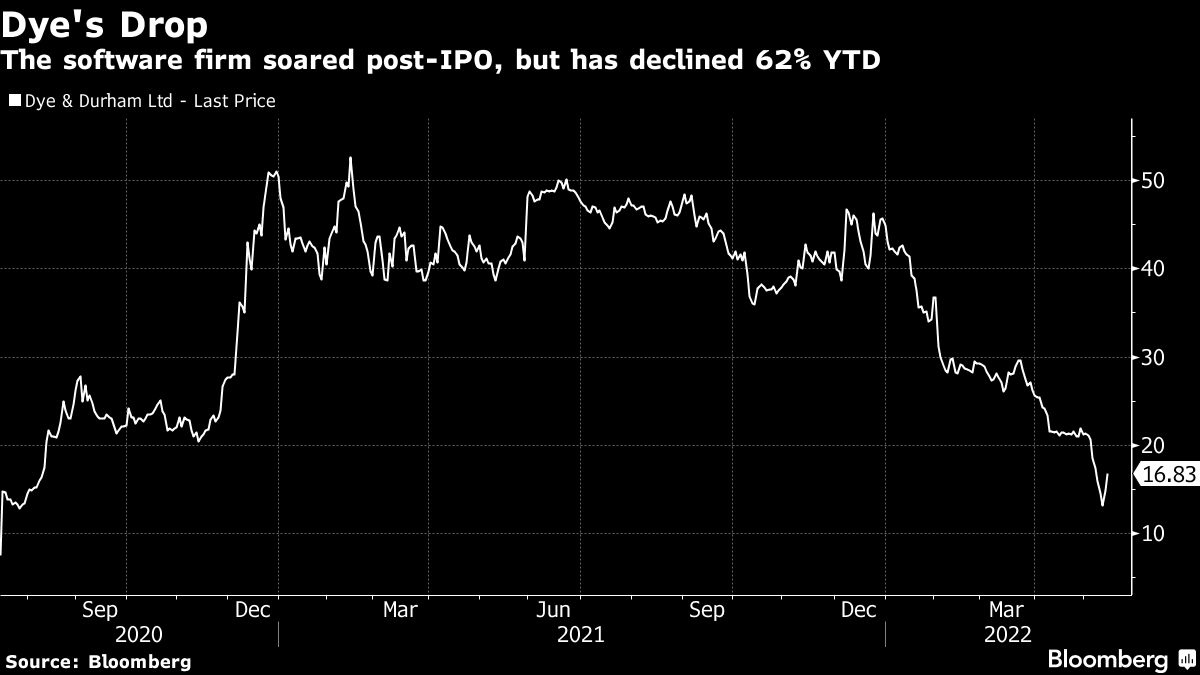 Link, a back-office technology provider to pension funds, banks and other companies, has sagged well below the A$5.50 (US$3.80) takeover price. Trading in Australia was briefly paused this week after market regulators queried a sudden drop in the share price. Link said it couldn’t explain the trading activity; it ended the week nearly 20 per cent below Dye & Durham’s bid.

Proud says there’s no risk to the deal financing, which includes as much as $841 million in preferred equity from Ares Capital Corp. The preferred shares are convertible into common stock at a price of $53 a share.

Toronto-based Dye & Durham is now trading far below that level. It dropped as low as $12.94 this week and has plunged 62 per cent this year amid a selloff in software stocks and concerns about the Link deal -- though it’s had a strong bounce the past two days. The shares were up 12.2 per cent to $16.87 at 2:15 p.m. in Toronto on Friday.

Ares can’t get out of its commitment and it won’t be repriced, Proud said. An Ares spokesperson declined to comment.

Goldman Sachs Group Inc., JPMorgan Chase & Co., Bank of Montreal, Bank of Nova Scotia and Ares are the joint lead arrangers of a term loan of A$3.5 billion to fund the deal and refinance existing debt.

Asked if he had any regrets about the price Dye & Durham paid for Link, Proud said: “Look, it’s hard to speculate what would have happened. Hindsight’s always 20-20. But this is a really good opportunity for us, and it continues to be.”

The company’s belief that the deal will close and its economics are sound should help ease investor worries, Raymond James analyst Stephen Boland wrote in a note to clients. “The market is indicating this is a broken deal so management’s comments should reduce this concern though we doubt they will fully alleviate them,” Boland said. The stock would probably fall if the deal were to fail, he said.

Dye’s debt-to-Ebitda ratio is expected to rise to 4 with the Link deal, according to Boland. That’s one reason investors have been nervous about the company’s financial outlook. Dye & Durham said this week its Ebitda guidance for fiscal 2023 hasn’t changed.

Proud and his management group made an offer last year to take the company private for $50.50 a share. But a number of shareholders opposed it and board decided not to pursue it.