Canadian software provider Dye & Durham Ltd. surged almost 18 per cent after a shareholder group led by management offered to buy the company for about $3.4 billion (US$2.8 billion), less than a year after it went public.

The Toronto-based company said Monday it will form a committee of directors to evaluate its options following an approach by executives who want to take it over for $50.50 a share. The shares closed at $48.24 in Toronto, up 17.7 per cent.

The disclosure may bring financial buyers into the arena, according to Canadian Imperial Bank of Commerce analyst Stephanie Price. “We see private equity as the most likely alternative bidder,” Price wrote in a note. Dye & Durham could take on “much more leverage as a private company than the public markets would be comfortable with,” she said. 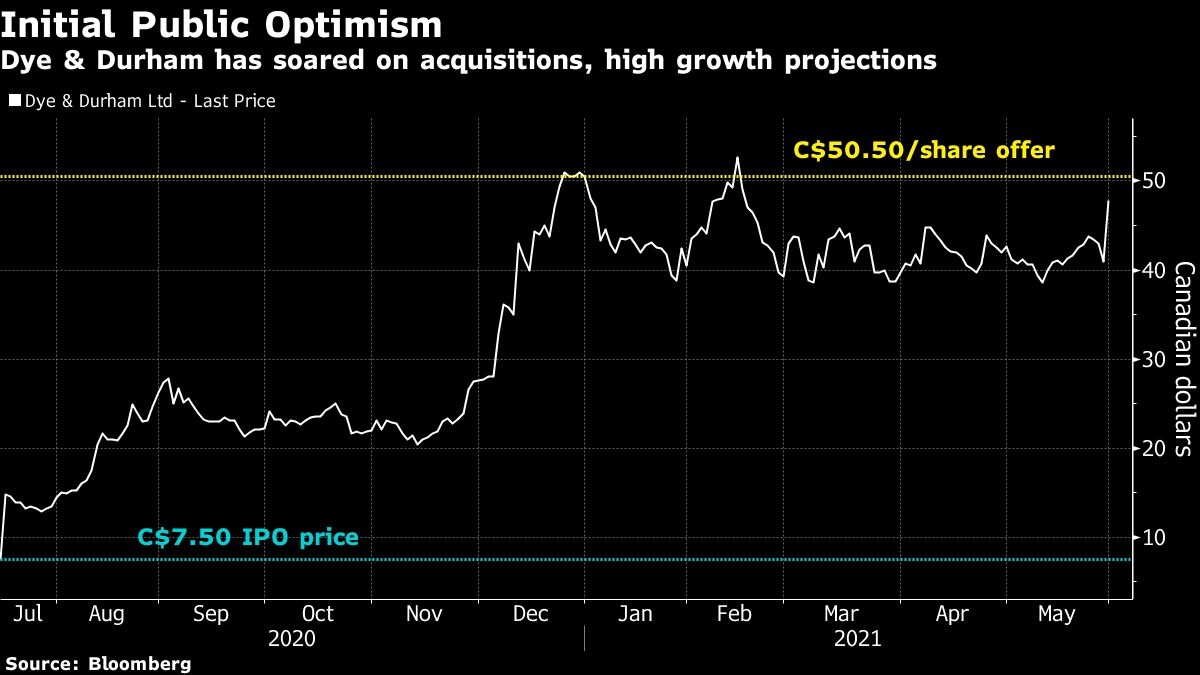 The offer is 23 per cent higher than Friday’s close and more than six times the $7.50 price of the initial public offering last July. The board committee will consider other bidders or merger partners and will also examine a sale of assets, the company said.

One large shareholder expressed opposition to the go-private transaction. “We think Dye & Durham is an excellent company and should remain public,” Jeff Mo, lead manager of Canadian small cap strategies at Mawer Investment Management Ltd., said in an interview. Mo said he would reconsider his view if the board process leads to a bidding war. Mawer holds about 9 per cent of Dye & Durham, he said.

The company has been led since 2014 by Chief Executive Officer Matthew Proud, who has expanded it through a number of acquisitions in Canada, the U.K. and Australia.

“The decision by management to purchase the business will raise eyebrows, given recent concern on insider selling and the need to raise significant capital,” Canaccord Genuity analyst Robert Young said in a note.

To help fund its acquisition spree, Dye & Durham has tapped equity markets on several occasions since the IPO. The most recent was a February issue of nearly 4 million shares at $50.50 -- the same price as the proposed takeover offer.

The company’s statement didn’t say which members of management are part of the group that wants to take the company private. The company said that, following recent acquisitions, it expects $220 million in annualized pro forma adjusted earnings before interest, taxes, depreciation and amortization.

Last year, Matthew Proud and his brother, Avesdo Inc. Executive Chairman Tyler Proud, were part of a failed $58 million offer for Torstar Corp., the publisher of the Toronto Star.