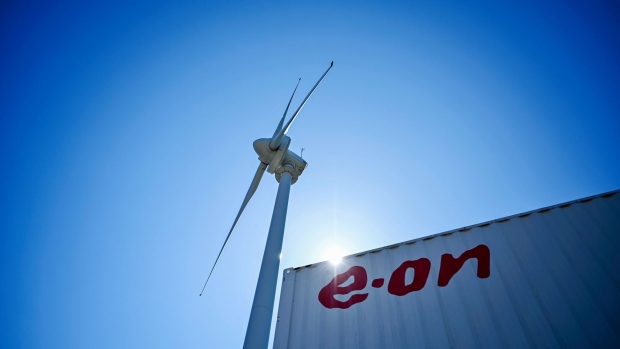 A wind turbine at the local power grid, operated by EON SE, in Simris, Sweden, on Monday, April 19, 2021. The thousand-year-old Swedish village could become a blueprint for local energy grids of the future. Photographer: Mikael Sjoberg/Bloomberg , Bloomberg

The companies will work together to supply 5 million metric tons of green hydrogen a year by 2030, they said in an emailed statement on Tuesday, after signing a memorandum of understanding in Berlin. The fuel will be produced using renewable power in Australia and will be distributed by E.ON.

The agreement comes as Europe tries to wean itself of Russian gas in response to the invasion of Ukraine. While five million tons of hydrogen would be equal to about a third of the energy Germany imports from Russia, there are still logistical and infrastructure hurdles to be overcome.

“Green energy will reduce fossil fuel consumption dramatically in Germany and quickly help substitute Russian energy supply, while creating a massive new employment intensity industry in Australia,” Andrew Forrest, chairman and founder of FFI, said in the statement. “This is a cohesive and urgently needed part of the green industrial revolution underway here in Europe.”

Europe is betting on hydrogen as a way to transition to cleaner forms of energy, a move that’s gained even more traction amid the war in Ukraine. High energy prices have improved the economics of hydrogen when compared to fossil fuels, with a wave of projects starting to take shape in Europe.

“The race for large scale production and transportation of green hydrogen has taken off,” German Economic Minister Robert Habeck said in the statement. “The agreement between E.ON and FFI is a major step forward and puts them in a pole position for the delivery of green hydrogen to German industry.”

E.ON and FFI said they will work together to analyze possible solutions to “solve infrastructure issues and to build a secure value chain,” according to the statement.