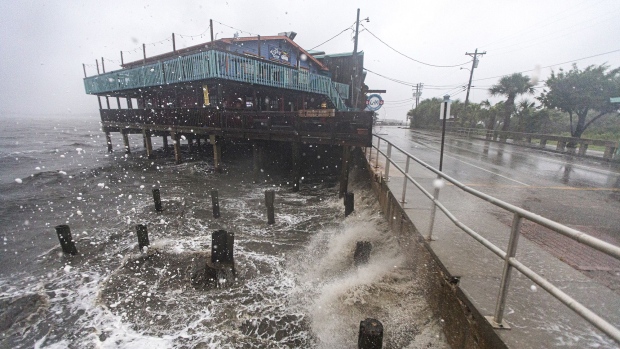 (Bloomberg) -- A quick start to the Atlantic hurricane season saw five storms form so far this year, well ahead of normal pace of a normal year, before settling into a lull that’s lasted several weeks. The conditions that created this quiet period — an annual eruption of waves of dry air and dust from the Sahara rolling out across the Atlantic from Africa to the Americas — are ending just as the traditionally hurricane-heavy month of August begins.

The large cloud of Saharan Desert dust spent much of July meandering across the Atlantic basin, showing up on NASA satellites as a light-beige smudge spreading out from West Africa and reaching all the way to South America. While the dust itself doesn’t stops hurricanes, the dry air that carries it stops thunderstorms drifting across the Atlantic from growing into tropical storms.

“Once we move into the first week of August, we will see the dust diminish,” said Jim Rouiller, lead meteorologist at the Energy Weather Group. “This is basically normal, and it’s one reason why we see the big uptick in storms later in August.”

While hurricane season officially starts June 1, the most frenetic period is between August 20 and October 1, with the statistical peak coming on September 10. It’s during this time that the worst storms tend to form between the Caribbean islands and Cabo Verde off the African coast. The storms that form in this area, called the main development region, tend to last longer and carry more destructive power than any other systems.

On Wednesday, the U.S. National Oceanic and Atmospheric Administration said it expects 15 to 21 named storms in the Atlantic this season, up from a forecast issued in May that called for 13 to 20. NOAA expects up to five of those to be major hurricanes, with winds of 111 miles per hour or higher.  “While recent weeks have been slow, a busy hurricane season remains ahead,” said Matthew Rosencrans, lead seasonal hurricane forecaster at the U.S. Climate Prediction Center.

Of the five storms that have formed near the U.S. coast so far in 2021, three have hit the country. A storm gets a name when its winds reach 39 miles (63 kilometers) per hour, and on average 14 such systems form each year. A record 30 storms were named across the Atlantic in 2020, with an all-time high of 12 hitting the U.S. Back-to-back hurricanes hit Louisiana last year, as well as additional twin strikes in Honduras and Nicaragua.

The role of climate change comes into the forefront during storm season. Many observers theorize that warming temperatures won’t necessarily deliver more storms in total across the Atlantic, but those that do form are likely to be more powerful. That means in a warmer world it would be more common to see major hurricanes.

Warmer conditions also mean there is more moisture in the atmosphere, which will lead to hurricanes bringing much heavier rain when they make landfall. Flooding kills about half of all people who die in storms.

In the U.S., tropical storms and hurricanes caused $42.3 billion in losses and damage and killed at least 86 people last season, according to the National Centers for Environmental Information. Already this year, the Central American storms caused more than $3 billion in damage to Honduras, Guatemala, and Nicaragua, according to the United Nations and government estimates.

There’s also a question of how climate change impacts the movement of storms. Hurricanes and tropical storms don't move under their own power, needing larger forces to pull and push them along. Often it’s the clockwise-spinning edge of a high-pressure system or the counter-clockwise motion of a low-pressure system that moves a hurricane across the map. Some climate scientists suspect that the warmer world has weakened the jet stream, a main conveyor of these larger systems, forming blockages in the atmosphere.

A hurricane encountering one of these blocks can stall, as Hurricane Harvey did over Texas in 2017, or change direction in an unexpected ways, such as Superstorm Sandy in 2012, with sometimes deadly consequences.