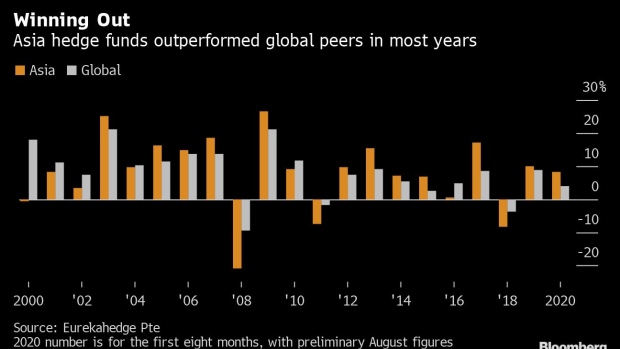 (Bloomberg) -- A few Asia-based hedge funds benefited from early insight into the pandemic’s impact to post outsized gains this year, while regional peers are on track to outperform global funds for the eighth time in 12 years.

Anatole’s $2 billion flagship fund returned more than 60% in the first eight months, said a person with knowledge of the matter. Aspex, which oversees more than $3 billion, gained 54%, said another person. CloudAlpha’s global technology fund surged 135% in the same period, and Franchise’s $1 billion fund jumped 133%, according to investor newsletters seen by Bloomberg News. The average return for Asia funds was more than 8%, double the global funds gain of 3.9%, according to Singapore-based Eurekahedge Pte.

Proximity to China, the initial epicenter of the Covid-19 outbreak, gave the funds a vantage point to see how the pandemic would play out elsewhere. That prompted them to either short companies expected to suffer long-term damage, or bargain-hunt stocks primed for a quick rebound. Even before March, the four firms gravitated toward technology and e-commerce -- industries that have been bolstered by the virus.

The flexibility to join attractively priced private deals also helped them beat the 23% advance of the MSCI World Growth Index. Anatole, Aspex and CloudAlpha invested a combined $115 million in a private preferred share issue by Xpeng Inc. They more than doubled their money after the Chinese smart electric vehicle maker went public in August and surged afterwards.

Here’s a summary of some of the funds’ bets:

Anatole’s flagship fund avoided the March carnage and made money from bearish wagers on U.S. and European companies, such as those in tourism, that were hardest hit by Covid-19, a person familiar said.

Closer to home, it profited from bullish calls on Asian e-commerce platforms and data centers in China, including a private funding round of Japanese payment and e-commerce platform Hey, according to a statement. Anatole also made money from Chinese and Japanese consumer stocks, such as makers of snacks and seasonings, and scored further wins from consolidation among Chinese auto dealers, the person said.

Aspex, a long-term fundamental stock picker, scored gains from regional industry leaders whose shares were pummeled in March even though their operations were hardly affected by the pandemic. This included e-commerce stocks such as Sea Ltd., the Tencent Holdings Ltd.-backed company benefiting from the surging popularity of internet games and e-commerce in Southeast Asia, a person said. Singapore-based Sea has jumped almost four-fold this year.

Even in the hardest-hit industries of travel, retail and gaming, Aspex has been searching for companies with strong financial positions to withstand the virus shock. Budget airlines with low operating costs serving short-haul domestic and regional routes will lead the recovery over high-cost legacy carriers, the person said.

Investments in enduring trends such as electric vehicles in China also paid off. While ownership of these cars remains low, a breakthrough is within reach this year or next, the person said. Technological advances have brought down battery costs, making the prices of such cars more comparable to traditional vehicles.

Aspex invested $90 million in the preferred share issue of Xpeng in July, according to a regulatory filing, and plans to hold it long term. Aspex is led by Hermes Li, who formerly managed billions of dollars at Och-Ziff Capital Management Group.

CloudAlpha, led by Nancy Yang, also rode gains in electric cars, with stakes in Tesla Inc. and its Chinese peers NIO Inc. and Xpeng. NIO has soared almost 380% this year.

Lasertec is the world’s only maker of testing machines to verify chip designs for the nascent extreme ultraviolet lithography method of chip-making which promises to unleash another wave of slimmer, more powerful gadgets. Lasertec’s share price has jumped six-fold since the end of 2018.

Earlier this year, CloudAlpha profited from a bearish bet on Luckin Coffee Inc., according to an investor update seen by Bloomberg. Shares of the Chinese restaurant chain found to have inflated its revenue have slumped about 93% this year.

Holdings in China Youzan Ltd., which provides e-commerce and payment solutions for merchants, contributed to the year’s gains, according to a personal familiar with its performance. Franchise bought shares for 53 Hong Kong cents each last year. It now trades at almost HK$1.50.

Representatives from Anatole and Aspex declined to comment, while those from CloudAlpha and Franchise didn’t reply to email messages seeking comment.