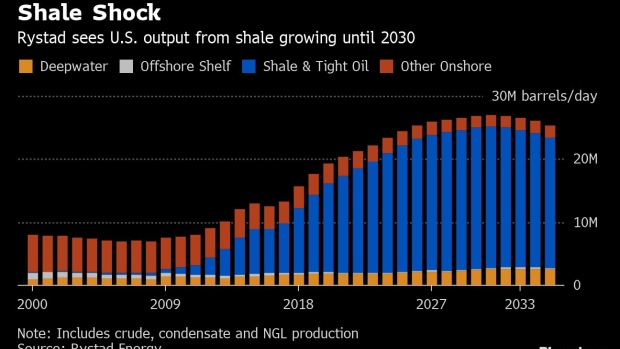 The sun sets behind an oil rig seen from Monahans Sandhills State Park in Monahans, Texas, U.S., on Tuesday, June 19, 2018. In the West Texas plains, frack-sand mines suddenly seem to be popping up everywhere. Twelve months ago, none of them existed - together, these mines will ship some 22 million tons of sand this year to shale drillers in the Permian Basin, the hottest oil patch on Earth. Photographer: Callaghan O'Hare/Bloomberg , Bloomberg

(Bloomberg) -- The U.S. will account for almost a quarter of global oil and gas production by the early 2030s as the shale boom keeps on booming, according to the head of Rystad Energy.

Output from shale including crude oil, condensate and natural gas liquids could climb to as high as 25 million barrels a day, Jarand Rystad, chief executive officer of the research and intelligence company, said in an interview in Kuala Lumpur. The U.S. will likely make up about 23% of global liquids production and pump 27% of the world’s gas by then, he said.

Part of the reason for the expected growth is that companies are getting better at hydraulic fracturing, the process of pumping a mixture of water and sand into a horizontal well to create millions of tiny cracks in the shale rock that allow oil and gas to flow to the surface. Frackers are using more sand, creating more cracks and boosting the productivity of each well, Rystad said.

“It’s about sand, horsepower and water injection,” he said at the Asia Oil & Gas Conference. “Those three parameters are what’s driving activity levels, and those are three times higher today than they were back in 2014.”

Rystad has been a staunch believer in U.S. shale since early this decade when many analysts and OPEC ministers were unconvinced that a natural gas drilling revolution would translate to a surge in oil output. He recalled being labeled “ridiculously too aggressive” in 2012 when projecting shale crude production would grow fourfold to 4 million barrels a day within four years. The forecast was too low and shale has transformed the nation into the world’s biggest producer.

See also: Texas’s Gas Glut Is So Bad Drillers Are Pumping It Down Wells

Looking ahead, Rystad’s optimism is also based on a recent study he’s done on the so-called parent-child interference issue, a concern that drilling a new well too close to an older one will reduce pressure in the original and cut output. While the results were mixed, overall the study showed that companies can stack wells more densely, creating enough drilling locations to support 10 to 15 more years of output growth, he said.

The shale surge underscores just how far the U.S. industry has progressed since former President George W. Bush promised to cut imports from the Middle East when he declared in 2006 that the country was “addicted to oil.” Now, said Rystad, the world is so dependent on American production that if fracking were ever banned it would cause a global energy crisis.

“Shale has become a drug that the world is addicted to,” Rystad said . “We cannot live without it. We’d never be able to compensate with OPEC and offshore production.”

To contact the editors responsible for this story: Ramsey Al-Rikabi at ralrikabi@bloomberg.net, Ben Sharples, Andrew Janes