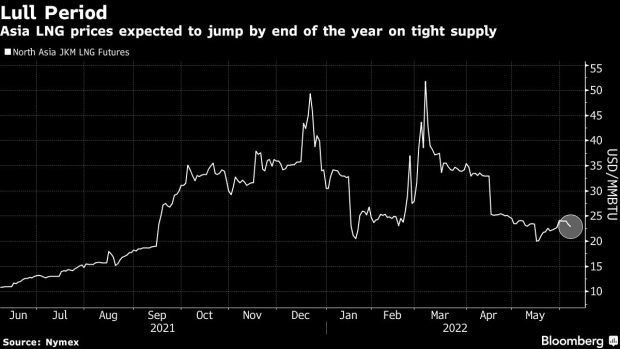 Tanks onboard the Karmol LNGT Powership Asia floating storage and regasification unit (FSRU), operated by Karpowership, viewed from the ship's bridge whilst docked at Cape Town port in Cape Town, South Africa, on Tuesday, April 19, 2022. Karpowership, the world’s biggest supplier of floating gas-fired power plants, is expanding its generation capacity by 50% to tap global demand even as it struggles to get projects going in potentially its biggest market. Photographer: Dwayne Senior/Bloomberg , Bloomberg

(Bloomberg) -- Liquefied natural gas buyers in Asia are already busy securing cargoes for winter, indicating that competition in a tight market may lead to a further jump in prices.

India’s Gujarat State Petroleum Corp. this month purchased spot LNG shipments for winter delivery at a 20% premium to summer prices. Meanwhile Korea Gas Corp., one of the world’s top buyers of the chilled gas, has said it’s considering boosting supply for winter and Japan’s government seeks to strengthen its involvement in procuring fuel from overseas.

The moves by the importers, which normally stock up for the peak winter season over summer, may amplify concerns that demand will outstrip supply as Europe increasingly taps the seaborne market to reduce its reliance on pipeline gas from Russia. North Asia LNG futures for December and January jumped to a two-month high last week, while spot market prices that have come off March’s record highs are still more than triple their five-year average.

“LNG prices remain well above where they normally are, even adjusting for higher crude oil prices,” Sanford C. Bernstein analysts including Neil Beveridge said Wednesday in a note. “We expect this to be a lull before what looks like a tough winter ahead for consumers.”

Spot prices will likely rise above $30 per million British thermal units by the end of the year, from the current mid-$20s range, according to Bernstein. Costs will remain high over the next two years, assuming there is no global recession, as a result of the war in Ukraine and an underinvestment in new supply, according to the analysts.

China, the world’s biggest importer, cut deliveries by about a fifth in the first half of the year after measures to curb a Covid-19 outbreak curbed fuel demand. While Chinese importers haven’t yet started buying spot cargoes for winter, Bernstein said it expects demand in the nation to rebound as virus restrictions are removed.