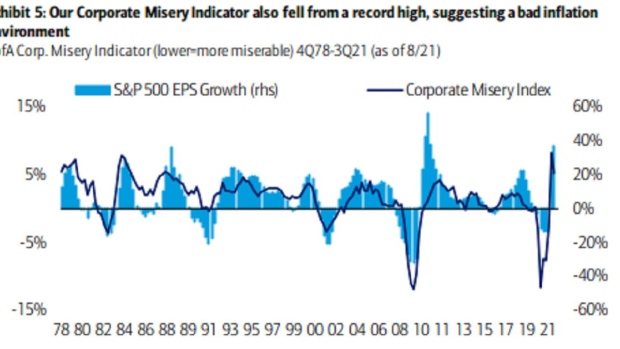 An employee removes a five-gallon bucket of primer from a mixing machine inside a Sherwin-Williams Co. store in Princeton, Illinois, U.S., on Wednesday, Jan. 25, 2017. Sherwin-Williams Co. is scheduled to release earning figures on January 26. Photographer: Daniel Acker/Bloomberg , Bloomberg

(Bloomberg) -- An alarming number of companies have warned that profits won’t meet expectations when they report in a month.

The group, including PP Industries Inc. and Sherwin-Williams Co., are primarily materials producers that have struggled amid supply-chain disruptions. While just a small part of the S&P 500, their earnings have historically been the most correlated to the index’s of all sectors, a study by Bank of America Corp. found.

The profit warnings come as economic growth is slowing, price increases for final products and services are missing forecasts and wage pressure is building. Taken together, the result is a deterioration in what BofA calls the “corporate misery indicator,” another signal that worsening earnings momentum could spread into the broader market. That would rob bulls of a key reason stocks have weathered everything thrown at the market in the past 18 months -- corporate America’s ability to deliver blockbuster results.

“It’s been upward earnings revisions that have supported stocks here and rather high valuations,” Jeffrey Kleintop, chief global investment strategist for Charles Schwab & Co., said in an interview on Bloomberg TV with Caroline Hyde. If “we start getting some disappointment, as we’ve recently had with the economic data, that could undermine the key support for the market.”

The S&P 500 fell 0.6% in the past five days, for a second straight weekly drop. Its Friday slide was the worst in a month, and it last hit an all-time high on Sept. 2. That barren period contrasts with earlier this year, when the index rose to arecord almost every week.

How much profit is priced in the current market? Assuming the S&P 500’s price-earnings ratio slips back to its five-year average of 19.6, that implies index-wide profits of $228 a share. Analysts are skeptical. They cut their estimates for the first time since March, expecting 2021 profit to stall near $200 a share, data compiled by Bloomberg Intelligence show.

To be sure, supply-chain bottlenecks and inflation pressure have been mounting all year, and they were no hurdles for companies that took all measures to cut costs and deliver robust results. For five quarters in a row, they beat profit estimates by at least 15%.

Analysts are likely to continue to play catch-up once the reporting season starts, according to Leuthold Group’s Jim Paulsen. He expects S&P 500 companies to earn $220 a share this year.

“Growth is slowing because of delta and other factors. but we’re still growing at a very good rate, probably 5% to 6% now, and maybe 4% and 4.5% next year -- those are rates that are still far above anything we’ve seen in the last couple decades,” Paulsen, chief investment strategist at Leuthold, said in a BTV interview with Jonathan Ferro. “When corporate America is in the most efficient position, give them rapid growth, profits just soar.”

But to skeptics like BofA’s strategist Savita Subramanian, the growing evidence of profit headwinds is getting hard to ignore. Business leaders, themselves, are signaling caution as the ratio of companies with above-consensus guidance versus those with below-consensus guidance has fallen sharply from a record, the firm’s data show.

While American companies just rode the wave of inflation to record profits, BofA’s corporate misery indicator now points to “a bad inflation environment” that could hurt profit margins. The indicator, which compares the growth rates of the real economy and consumer prices against wage growth, has shown a close relationship with the profit cycle.

Gina Martin Adams, chief equity strategist at Bloomberg Intelligence, echoes the concern, noting consensus margin estimates have fallen for 140 companies in the S&P 500 during the past three months and are driving variation in returns among stocks. Over the stretch, firms whose margin estimates fell saw their stocks slide about 1% on average. That compared with a 5% gain for those with rising margin forecasts.

More ominously, a peak in margin forecasts foreshadowed four of the S&P 500’s largest routs in the last decade, including the one last year, BI’s study shows.

“Longer-term forecasts have been persistently higher as analysts see cost pressures as largely temporary, but sustained inflation numbers threaten to eat away at company profitability,” Martin Adams wrote in a note. “If the August stall in expectations turns into an outright decline, it’s likely to lead to a drop in the market at large.”