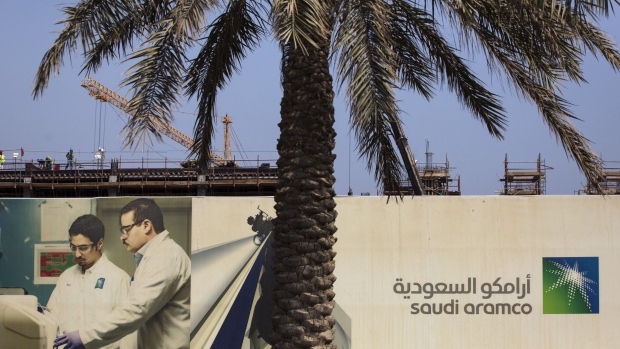 Cranes operate at the construction site of a new building project at the Saudi Aramco oil company's compound in Dhahran, Saudi Arabia, on Wednesday, Oct. 3, 2018. Speculation is rising over whether Saudi Arabia will break with decades-old policy by using oil as a political weapon, as it vowed to hit back against any punitive measures after the disappearance of government critic Jamal Khashoggi. Photographer: Simon Dawson/Bloomberg , Bloomberg

(Bloomberg) -- The world’s addiction to fossil fuels, the race for renewables and the costly impact of climate change will all be in focus in this week’s raft of corporate earnings. Attention will be on Munich Re on Tuesday after smaller reinsurer Hannover Re this week stuck by its profit target. Wind turbine maker Vestas will be in focus on Wednesday after Siemens Gamesa cut guidance again on surging commodity costs and supply chain disruption. And, following a series of estimate-busting profits and share buybacks from TotalEnergies, Shell and BP, it’s Saudi Aramco’s turn on Sunday to show how much it has benefited from soaring oil prices.

Earnings highlights to look out for next week:

Tuesday: Munich Re (MUV2 GY) is due to report before market open. The reinsurer likely made only 40% of its targeted full-year profit of 3.3 billion euros ($3.36 billion) in the first half, suggesting the goal may be moving out of reach, Bloomberg Intelligence says. Uncertainty around the extent of losses due to natural catastrophes means the range of analysts’ estimates is wide, however, Bloomberg’s MODL consensus shows, and Munich Re’s life segment may see a sharp profit recovery as the rate of Covid-19 deaths slows, according to BI’s Charles Graham and Kevin Ryan.

Wednesday: Vestas (VWS DC) is due to report before market open. Battered by high steel prices and supply chain disruption, the world’s biggest wind turbine maker is expected to post another operating loss for the second quarter. Even so, the Danish company probably fared better than European peers such as Siemens Gamesa and Nordex, BI says, with a service-division operating margin above 20% a likely bright spot. Wind turbine makers have been busy finding ways to combat higher costs, and prices have risen 18% from levels seen before the pandemic, according to BloombergNEF. Looking beyond this year and next, Vestas has potential to boost turbine shipments a lot faster than analysts currently expect, according to BI’s Rob Barnett.

Thursday: Deutsche Telekom (DTE GY) is due to report at 7 a.m. CET. The company may bump up its full-year guidance again on the back of T-Mobile US’s recent upgrade, though it’s unlikely to go overboard as dark macro clouds cast a shadow over the B2B services business, BI’s Erhan Gurses writes. Proceeds from the sale of a 51% stake in its tower business will go a long way toward cutting debt and bolstering shareholder returns, according to Kepler Cheuvreux, which reinstated its buy rating on the stock on Aug. 1. Deutsche Telekom is one of few European players with potential for higher dividends, BI says.

Friday: UK gambling companies Flutter (FLTR LN) and 888 (888 LN) are due to report at 7 a.m. London time. The focus will be on the health of Flutter’s US operations, which are expected to achieve positive adjusted Ebitda in 2023. Success or failure there may help determine how the company is viewed, especially as customers look to other forms of leisure in the wake of Covid-19 lockdowns, BI analysts say. 888 investors, meanwhile, will want to know more about the impact of the recently completed acquisition of William Hill’s international operations, which the company said would boost adjusted EPS. 888 has suspended its dividend to prioritize repaying lenders as the deal pushed debt higher than it had expected, although it also trimmed its enterprise valuation. In the UK, both companies could face stricter government regulations. Bloomberg reported in June that ministers are considering maximum stakes of between £2 and £5 for online casinos and a ban on free bets.

Sunday: Saudi Aramco (ARAMCO AB) is due to report before 10 a.m. local time. The world’s biggest energy exporter could see second-quarter net income almost double on the back of rising oil prices, according to BI. Oil traders will be watching for comments on the market and any changes to capital spending on production capacity as OPEC tries to balance US calls for higher output and fears of a recession.