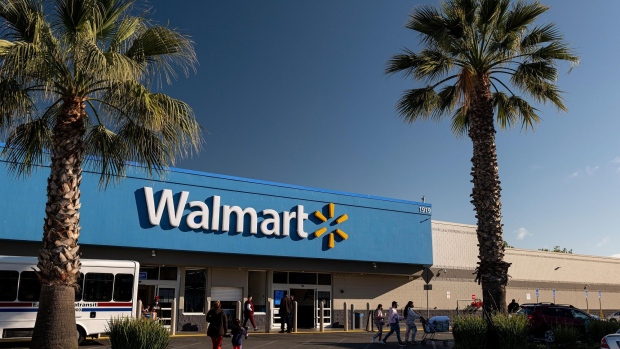 Shoppers walk outside a Walmart store in San Leandro, California, U.S., on Thursday, May 13, 2021. Walmart Inc. is expected to release earnings figures on May 18. , Bloomberg

(Bloomberg) -- Corporate America’s better-than-feared results, paired with cooling US inflation trends, may have offered some relief to equity investors this week, but the gains are masking earnings misses this season. The proportion of S&P 500 firms falling short of second-quarter EPS estimates so far hasn’t seen much improvement from last week’s 19.9%. As big-box retailers take center stage, this level could face more pressure when report cards from Walmart, Home Depot and Target surface, and Wall Street has been bracing itself over the past month and slashing earnings-per-share estimates. Bloomberg Consensus estimates have trended lower for nearly all companies in the S&P 500 Consumer Staples and Discretionary indexes that are reporting next week, with Bath & Body Works’ (BBWI US) profit projection getting cut by 24%.

Monday: Li Auto (LI US) reports before the bell. Consensus estimates point to a sequential decline in revenue and deliveries for a second straight quarter, as Covid lockdowns in China forced a cut in output, Bloomberg Intelligence said. Investors could seek details from the Beijing-based maker of luxury electric SUVs on plans to shore up the supply chain as the company aims to almost double its car sales by 2025.

Tuesday: Walmart (WMT US) is expected to report before the bell. After the company warned that quarterly and yearly earnings will be lower than first expected, investors will be looking for details on which products are still attracting consumer spending. Walmart has been hard done by inflation that has forced customers to step-up purchases of food and other staples over higher margin, discretionary items, according to Bloomberg Intelligence, with more markdowns likely needed to move overstock inventory in some areas. Management might field questions on plans to diversify the business after a New York Times report that Walmart held talks with several streaming companies over a possible partnership.

Wednesday: Target (TGT US) is due to report premarket. The retailer’s EPS is expected to sharply fall by around 80% year-over-year as the company took drastic steps to rapidly liquidate its excess inventory, according to Bloomberg Intelligence, with further markdown expenses possible if customers continue to shift consumption into essential categories. The company has already cut its profit outlook twice in three weeks during the second quarter, as soaring stockpiles left the company unprepared to deal with changing demand. Still, inventories are expected to grow by 13% from a year ago, based on consensus estimates. Gross and operating margins are seen falling from last year again in the quarter, as discounts and higher supply-chain costs eat into profits. Target’s results could also give insights into what to expect for back-to-school shopping season, says BI.

Thursday: Estee Lauder (EL US) fourth-quarter results are due premarket. The fragrance and beauty company is expected to record its first year-over-year contractions in EPS and revenue in seven quarters as the Asia business, which drives nearly a third of revenue, was weakened by China’s Covid lockdowns during the period, prompting the firm to cut its full-year guidance. Its premium skin care, fragrances and cosmetics are still in demand despite inflation pressures, Bloomberg Intelligence wrote, though entry-level products could be vulnerable in the months ahead as consumers adjust their discretionary spending habits. The gradual return of airport shoppers as well as China reopenings could help offset such risks. Investors may also watch for management commentary on the reported $3 billion deal to buy luxury fashion brand Tom Ford, which would be the company’s largest acquisition so far, according to data compiled by Bloomberg.

Friday: Deere’s (DE US) third-quarter results are due before market open. Analysts for the agriculture equipment manufacturer are expecting EPS and revenue gains of more than 20%, thanks to higher production, slightly better price realization and gradual easing in the supply chain, BI said. Similar factors could push 4Q sales and margin to the highest levels of the year. Separately, Citi analyst Timothy Thein wrote that one of the largest commercial farms with operations across the western parts of US and Canada will soon replace equipment from competitor Case with an all-Deere fleet, something that can be seen as a testament to the company’s “precision and intelligence offering, well-capitalized dealer network and product portfolio,” and could help increase market share.