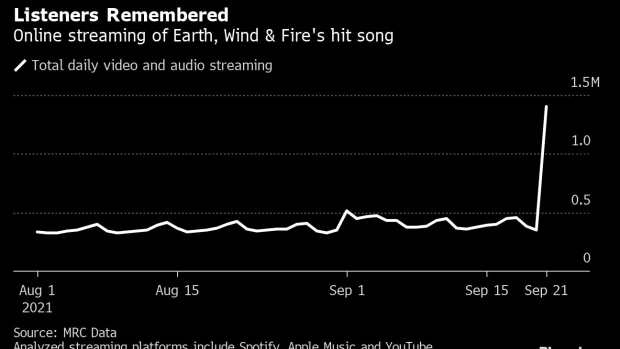 (Bloomberg) -- People did remember Earth, Wind & Fire’s hit “September” on the 21st night of this month.

For the fourth year in a row, the nearly six-decade-old pop-funk band registered a spike in streams and sales on the day it sang about in its 1978 hit. The song reached an all-time high daily number of streams this Sept. 21 after being played almost 1.5 million times across audio and video platforms, according to results from the research firm MRC Data. That’s more than four times the listeners it had the day before, when it was streamed 352,000 times.

Artists make money from streaming on services such as Spotify and YouTube.com as well as from sales of songs. The group, founded by its late singer Maurice White in 1969, has successfully used social media to promote its material. Each Sept. 21, it goes on sites including Facebook Inc. and Twitter Inc., wishing listeners a happy “Earth, Wind & Fire Day.”

The song has continued to gain momentum each September. This year it was streamed on audio platforms alone more than 1.4 million times, a more than 200,000 increase from 2020. Sales of the song also rose, reaching 2,500 copies from an average of 300 a day in the previous week. Last year, the band sold 2,000 copies on that day.

Another Earth, Wind & Fire hit, the 1981 single “Let’s Groove,” has also seen a spike in streams after the song spread quickly on TikTok this year, proving once again you’re never too old to boogie.