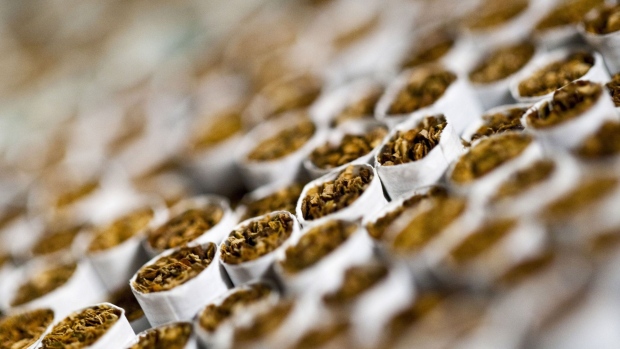 Cigarettes are arranged for a photograph in New York, U.S., on Thursday, April 14, 2011. , Bloomberg

The imminent easing of lockdown rules in South Africa may bring no respite for smokers who’ve been contending with a tobacco sales ban for almost two months.

Cooperative Governance and Traditional Affairs Minister Nkosazana Dlamini-Zuma, whose department plays a key role in determining the lockdown rules, argued in favor of extending the ban when restrictions are next relaxed, according to three people who listened to an online presentation she gave to lawmakers this week. The ban is one of several seemingly arbitrary coronavirus containment measures that have sparked public ire.

President Cyril Ramaphosa announced on April 23 that tobacco sales could resume from May 1, when the country moved from the top virus alert level 5 to level 4, but the government later backtracked and the ban remained in force. On May 13, Ramaphosa said the lockdown would be eased again by the end of the month to allow more businesses to reopen, but didn’t give details.

A ban on alcohol sales is likely to be partially lifted when the country moves to level 3, according to the people, who spoke on condition of anonymity. Dlamini-Zuma, who favors the retention of a strict lockdown, is starting to lose the support of some ruling party members, who see it harming the economy and are concerned that illicit trade in banned goods, including cigarettes, are gaining traction, they said.

Even before the ban, South Africa had one of the biggest illicit-cigarette markets, which costs the government about 7 billion rand ($394 million) a year in lost tax revenue, according to a report published and funded by the Tobacco Institute. About 90% of people who wanted to buy cigarettes during the lockdown were able to do so, albeit at inflated prices, an online survey of 16,000 people conducted by researchers from the University of Cape Town found.

British American Tobacco Plc and the Fair Trade Independent Tobacco Association suspended legal action against South Africa’s government earlier this month on the assumption that tobacco sales would be allowed to resume when the rules were next eased.

A medical doctor and former health minister who narrowly lost a 2017 election to head the ruling party to Ramaphosa, Dlamini-Zuma has defended her anti-smoking position, noting that sharing cigarettes could spread the virus.

“When people zol, they put saliva on the paper and then they share that zol,” Dlamini-Zuma said last month, using a local term for hand-rolled cigarettes that sometimes contain cannabis.

Research into the relationship between tobacco usage and Covid-19 is inconclusive. While the World Health Organization advises that smoking probably increases the risk of complications from the disease, French researchers said they’re testing whether nicotine could be used to treat it.