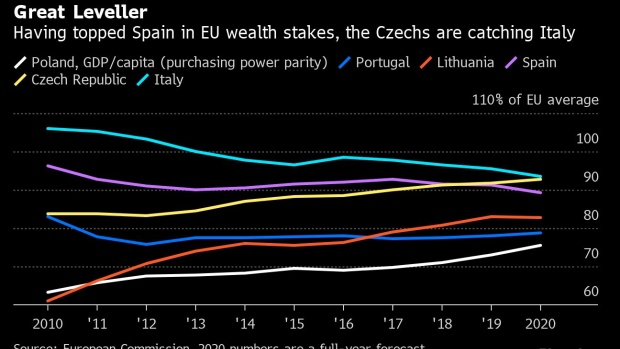 SLUBICE, POLAND - JUNE 13: Shoppers, mainly from Germany, walk among stalls at a border shopping area hours after Polish authorities reopened the nearby border during the novel coronavirus pandemic on June 13, 2020 in Slubice, Poland. Poland lifted restrictions on its border crossings to Germany, Austria and Slovakia starting at midnight, last night that had been in place since March to stem the spread of the virus. (Photo by Sean Gallup/Getty Images) , Photographer: Sean Gallup/Getty Images Europe

(Bloomberg) -- Europe’s east can find some consolation despite the unprecedented economic damage wrought by Covid-19.

Second-quarter data Friday showed countries’ output plunged by between 8% and almost 14% from a year earlier -- the worst slump since communism collapsed 30 years ago.

But swifter lockdowns than in the continent’s west softened the blow as well as the death toll, with the likes of Spain suffering a much deeper contraction. That means the wealth gap to richer European Union member-states is actually being narrowed -- a key goal for the region since nations began to join the bloc a decade and a half ago.

What’s more, there are signs that exports, long an engine of growth in the manufacturing-heavy east, have returned to early-year levels.

“The crisis will be a breakthrough in eastern and central Europe’s catch-up with the west because faster recoveries will help close the wealth gap,” said Zygimantas Mauricas, chief economist at Luminor Bank in the Lithuanian capital of Vilnius.

“The division between the east and the west may no longer be valid, and we may see a new division emerging instead between the north and the south,” he said.

Lithuania is looking like the EU’s star performer, contracting just 3.8% between April and June to prompt talk that growth is even possible over the whole of 2020. That will help it gain ground on countries such as Spain in the affluence stakes.

The Czech Republic, meanwhile, is closing in on Italy -- despite reporting a 10.7% dive in second-quarter GDP last month.

“The recent surge in new cases could lead to a delayed rebound in demand and the magnitude and the length of the impact on the economy can’t be credibly estimated at this point,” OMV Petrom, the country’s largest oil and gas company, said in a statement.

But green shoots have sprouted since lockdowns were eased, helped by record levels of fiscal and monetary support.

A rosier outlook for the global auto industry is starting to boost demand for cars from hubs like Slovakia and Hungary, which will come as welcome news after those nations recorded the region’s steepest second-quarter declines in output.

In Poland, the only EU state to avoid a recession after the 2008 financial crisis, the hit to the economy has so far been smaller than analysts expected, with some central bankers calling for interest rates to be raised from a record low as early as next year.