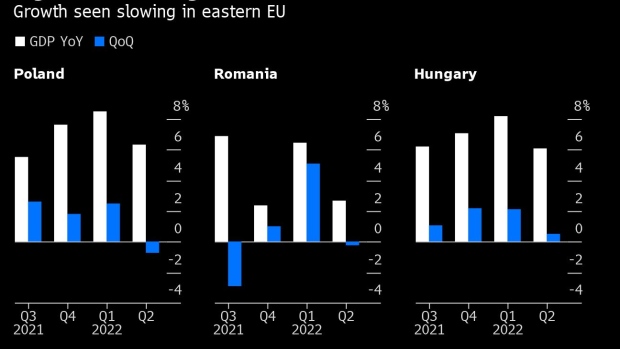 Poland’s economy shrank more than expected in the second quarter, even as Romania and Hungary held steady under an avalanche of economic challenges.

Polish gross domestic product dropped 2.3% in the April-to-June quarter, making a technical recession more likely according to analysts at mBank SA. And while annual growth rates slowed in all the three economies that published data on Wednesday, Romania delivered the biggest positive surprise, avoiding a predicted quarterly dip with 2.1% growth.

Still, all indications are that eastern Europe is tumbling toward a potential recession in the second half, in the face of Russia’s war and spiking prices.

Headwinds are mounting. The highest inflation in decades is forcing central banks to squeeze demand by raising borrowing costs. The energy crisis spurred by unpredictable supplies from Russia are causing a spike in utility bills. And a severe drought is expected to hit agriculture across the region.

Hungary, which was the only member state expected to avoid a quarterly dip, also performed better than expected with 1.1% growth, helped by a raft of tax breaks and a cap on fuel prices delivered by Prime Minister Viktor Orban ahead of his landslide election victory in April.

The Polish zloty and Hungarian forint extended losses against the euro, dropping 0.6% and 0.8% against the euro respectively, after the GDP data confirmed a slowdown in growth. The Romanian leu, which is managed by the central bank, weakened slightly by 0.1% to 4.887 against euro.

The Czech Republic, which reported its gross domestic product data at the end of July, also unexpectedly avoided a quarterly contraction. GDP advanced 3.6% on an annual basis and 0.2% from the previous quarter.

The mounting difficulties are already starting to show, however. European power prices jumped to a new record on Monday, while interest rates that have risen from near zero to the highest since before the global economic crisis are stifling demand for everything from houses to holidays.

“The outlook is not too rosy,” Erste analyst Katarzyna Rzentarzewska said, predicting economic contraction in the second half with consumer confidence reaching lows seen at the beginning of the pandemic. “Uncertainty in industry and foreign trade remains high, due to persisting supply-side bottlenecks, surging commodity prices and worries about energy supplies.”