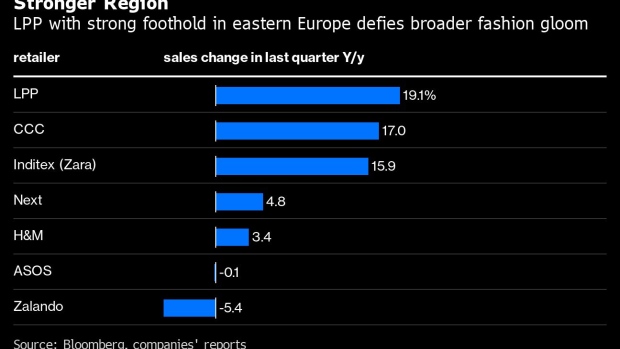 A customers takes her branded shopping bag after paying for items at London's first Reserved store, operated by LPP SA, during its opening day on Oxford Street in central London, U.K., on Wednesday, Sept. 6, 2017. As Poland's biggest clothing retailer steps up efforts to conquer Europe with its first London store, co-founder Marek Piechocki is determined not to repeat mistakes of the past. , Bloomberg

(Bloomberg) -- Eastern European consumers are weathering a once-in-a-generation cost-of-living crisis better than some of their peers in the west, according to one of the region’s biggest fashion retailers.

Poland’s LPP SA, which sells clothes under brand names such as Reserved, Cropp, House, Mohito and Sinsay, reported sales rising 19% year-on-year in the quarter ending on July 31, despite its exit from Russia. The retailer’s shares jumped as much as 10% on Thursday after it said trends remain intact and maintained its full-year guidance.

The positive signal from LPP contrasts with a more gloomy picture from western European peers including Hennes & Mauritz AB and Next Plc, which both flagged the impact of inflation on their consumers.

“We don’t see clients switching to cheaper brands yet,” Chief Financial Officer Przemyslaw Lutkiewicz told an earnings video-conference. “For the moment, we are able to pass higher costs on buyers, and we remain confident that sales in remaining part of the year should be intact. There is more uncertainty about 2023.”

The upbeat numbers come despite surging inflation and slowing economic growth across eastern Europe, the region most affected by the energy crisis triggered by Russia’s invasion of Ukraine. Nevertheless, strong job markets and government programs are helping consumers cope, at least for now.

“LPP’s earnings show that eastern Europe, with low unemployment and wages growth matching inflation, is currently stronger for fashion retail than western countries,” said Tomasz Sokolowski, an analyst at Santander Bank Polska SA. “The Polish retailer, with an already recognized low-cost brand in Sinsay, seems well positioned for the forthcoming slowdown and investors may start to realize that.”

LPP, which offers slightly lower pricing than its rivals, plans to boost its presence in countries such as the Czech Republic and Romania to compensate for the loss of its Russian market. It will also add stores in London and plans its first store opening in Italy, in Milan.

The company, which is exposed to the weakness of the Polish currency -- one of the world’s worst performers this year -- already raised its prices by 7-10%. It’s considering further increases if the US dollar, the currency used to pay for its collections in Asia, remains strong.