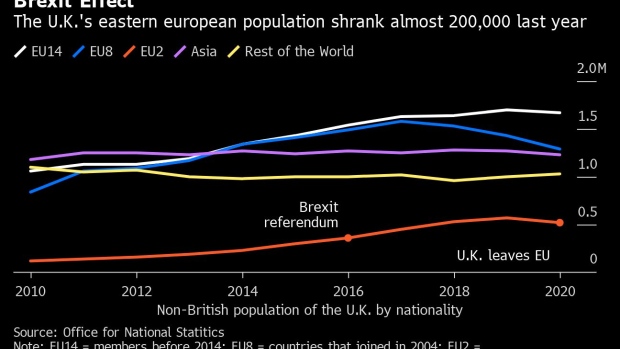 A Polish shop in the suburbs of Boston, Lincolnshire. The Lincolnshire town recorded the highest leave vote in the 2016 referendum with 75.65% of the population voting to leave the European Union. Boston also has the highest proportion of eastern European people in the UK. , Photographer: SOPA Images/LightRocket

(Bloomberg) -- The number of eastern Europeans living in the U.K. last year slumped to levels last seen in 2015 ahead of the end of the Brexit transition and as the coronavirus lockdowns closed closed huge parts of the economy.

The non-British resident population declined in the year through June, with the biggest decrease among citizens of the so-called EU8 countries that joined the European Union in 2004, according to Office for National Statistics estimates published Thursday. Those include Poland, Estonia and Slovenia.

The data raise questions about whether those workers will return once Covid-19 subsides. Immigration emerged as a flash point in the 2016 Brexit referendum, with some arguing that the bloc’s freedom of movement gave British citizens too much competition for jobs in their own country. Business group have pushed for more flexibility to hire in sectors where skills are short like health and construction.

A double whammy of Covid-19 and Brexit may help account for the decline in the number of eastern Europeans. The first U.K. lockdown in the spring of 2020 closed non-essential businesses and schools and may have prompted some workers to leave. London, which has seen its services economy hard hit by the virus, saw the largest exodus.