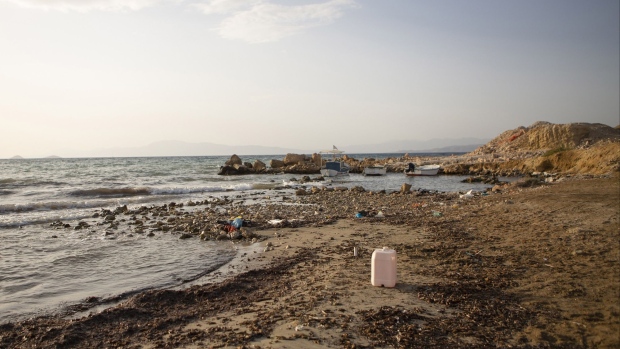 Plastic waste on a beach in Aegina, Greece, on Saturday, Sept. 18, 2021. The Aegean islands are parched, breaking the dependency on imported water will take more than the will of eco-conscious residents. Photographer: Eirini Vourloumis/Bloomberg , Bloomberg

The facility will start operations in 2025, processing up to 160,000 tons annually of hard-to-recycle plastic waste that’s currently being incinerated, Eastman said in an e-mailed statement Sunday. The move was welcomed by President Emmanuel Macron, who faces re-election in April and has been working to boost the country’s attractiveness to investors.

The investment is substantial and shows France’s “willingness to embrace innovative technologies,” Ecology Minister Barbara Pompili said in the statement. France “is giving itself the means to achieve its ambitious plastics recycling targets set for 2025.”

Eastman will use what it calls molecular recycling, where waste is broken down into their building blocks and rebuilt into new forms. Other companies including Ineos Group are looking at advanced plastics recycling. Finland’s Neste Oyj has a target to process 1 million tons of waste plastics a year by 2030.