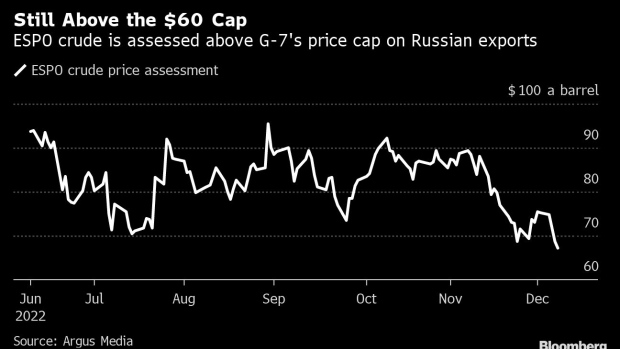 (Bloomberg) -- The price of Russian crude in Asia appears to be holding well above the $60 a barrel cap set by the Group of Seven nations as Moscow finds enough shipping and insurance capacity to meet its needs for now.

Some of China’s independent refiners are snapping up cargoes of Russian ESPO crude that are set to be delivered in January, according to traders. The export price of the nation’s main grade shipped from the Far East was assessed at $67.11 a barrel on Thursday by Argus Media, whose figures the Russian government has used to calculate export duties.

The refiners, known as teapots, get their cargoes on a delivered basis, meaning logistics and insurance will often be covered by the seller, according to traders involved in the transactions. Russian tankers have been used to move ESPO and vessel insurance is often provided by the OPEC+ producer itself, they added.

That clears a major hurdle under the price cap. Should buyers choose to take Russian crude and not adhere to the limit, they are unable to access crucial shipping and insurance services from European providers.

Sellers are doing the “necessary legwork” to ensure cargoes reach buyers, said Emma Li, an oil market analyst at Vortexa Ltd. All China’s refiners need is “the overall cost to be discounted and made competitive to other similar crude grades,” she added.

China is no stranger to taking barrels that others have shunned. Its refiners have purchased Venezuelan crude and regularly take Iranian cargoes, despite flows from Tehran being subject to US sanctions. ESPO can be transported to China in less than a week and yields profitable fuels like diesel.

Deputy US Treasury Secretary Wally Adeyemo said earlier this year that he doesn’t anticipate Washington applying sanctions on countries or companies that fail to join a proposed price cap on Russian oil.

In the latest trade, Wudi Xinyue Chemical Group Co. purchased an ESPO cargo for January arrival at a discount of more than $4 a barrel to ICE Brent for March. The final price will be known when the average contract pricing for March is available, but it’s unlikely to tumble below the G-7 cap.

In comparison, Russia’s flagship Urals crude that’s exported from Primorsk in the west was assessed at $41.59 a barrel on Thursday, well below the price cap, Argus data show.

--With assistance from Alaric Nightingale.