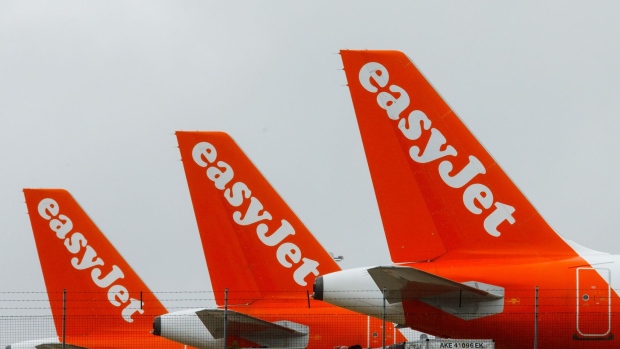 Passenger aircraft, operated EasyJet Plc, sit grounded on the tarmac at London Stansted Airport, operated by Manchester Airport Plc, in Stansted, U.K., on Thursday, July 9, 2020. EasyJet Plc is considering cutting a third of its pilot positions and may eliminate three bases in the U.K., including London's Stansted airport, in reaction to a business slump that the discount carrier doesn’t expect to rebound for another three years. , Bloomberg

The Luton, England-based airline received proxy votes worth 60% of share capital in favor of the conditional part of a 703 pence-a-share equity raise announced last month, Barton told investors on Tuesday. EasyJet needed a simple majority to push ahead with the proposal. Final results will be announced later on.

After the equity increase, EasyJet has said it will have more than 3 billion pounds of cash, including funds raised from sale-and-leaseback transactions on its aircraft. Liquidity has been boosted by a slightly lower-than-expected cash burn as more customers opt to take vouchers for canceled flights instead of asking for refunds.

The U.K.’s biggest discount carrier was among the first European airlines to start increasing flights as lockdowns eased, in the hope of salvaging the tail end of the summer season. EasyJet plans to operate 50% of its usual routes in July and 75% in August, though lower frequencies mean capacity will be down about 30% in the third quarter of the year.

EasyJet’s bid to counter the impact of the virus has been further complicated by feuding with founder and largest shareholder, Stelios Haji-Ioannou, who has used the crisis to press a long-held demand for the airline to cancel a large aircraft order with Airbus SE. Following the share sale, Haji-Ioannou’s stake in the carrier will drop below 30%, the company said last month.

On Monday, EasyJet’s pilots said they would hold a vote of no-confidence in Chief Operating Officer Peter Bellew this week, after the carrier said that it was considering cutting a third of its aviator positions and closing three bases in the U.K., including London’s Stansted airport.