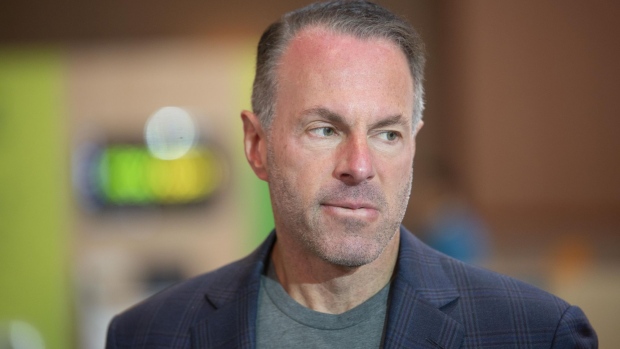 Devin Wenig, president and chief executive officer of eBay Inc., listens during a Bloomberg Television interview at the eBay Open conference in Las Vegas, Nevada, U.S., on Wednesday, July 23, 2019. Wenig discussed the launch of a new delivery service for sellers to debut in 2020. , Bloomberg

EBay Inc. and former top executives were sued for allegedly running a bizarre cyber-campaign to “terrorize, stalk and silence” a suburban Boston blogger and her husband who were critical of the e-commerce company.

Ina and David Steiner claim they were left psychologically damaged from the 2019 cyberstalking operation, which they say included macabre anonymous deliveries such as a bloody pig mask, surveillance by eBay security executives and phony online ads designed to send strangers to their home for sex parties.

EBay “engaged in a systematic campaign to emotionally and psychologically torture” the Steiners, of Natick, Massachusetts, according to the lawsuit, filed in federal court in Boston on Wednesday.

The couple, who put out the EcommerceBytes blog, alleges that former eBay chief executive officer Devin Wenig and former senior vice president Steve Wymer were enraged by the Steiners’ coverage of eBay and gave the company’s security team “carte blanche” to put an end to their reporting.

The U.S. has charged seven former eBay employees with conspiracy in the matter. Five pleaded guilty, and two are seeking trials. Neither Wenig nor Wymer has been charged, and both have publicly denied wrongdoing. Wenig stepped down from eBay in September 2019 and received a $57 million exit package.

“The culture itself within Ebay fostered an almost cult-like atmosphere where employees were not only expected, but required, to fulfill company directives, regardless of criminality,” according to the lawsuit, in which the Steiners seek an unspecified amount in monetary damages and any profits the defendants might make off book or movie deals.

“The misconduct of these former employees was wrong, and we will do what is fair and appropriate to try to address what the Steiners went through,” eBay said in a statement. The company said it was “extremely cooperative with the investigation in helping state and federal authorities figure out what had happened and collect evidence of the crime.”

Neither Wenig nor Wymer immediately responded to emails seeking comment on the lawsuit.

In their suit the Steiners cite messages from Wenig and Wymer to employees that were made public in prosecutors’ court filings as proof they are responsible.

“If we are ever going to take her down ... now is the time,” Wenig texted Wymer, according to court records.