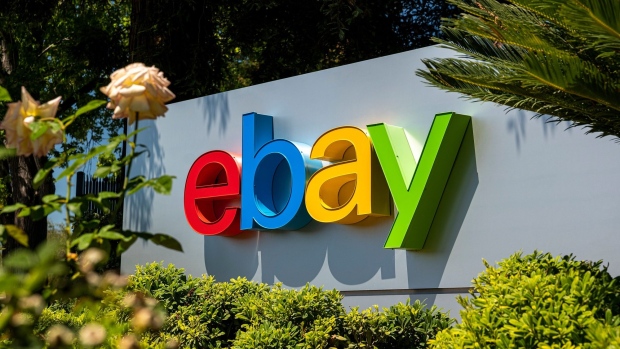 (Bloomberg) -- EBay Inc. worried investors with a holiday sales outlook that suggests shoppers are abandoning the online marketplace and resuming pre-pandemic spending habits. Shares fell as much as 7.7% in extended trading.

Sales will be $2.57 billion to $2.62 billion in the period ending in December, the San Jose, California-based company said Wednesday in a statement. Analysts, on average, estimated $2.65 billion, according to data compiled by Bloomberg. Earnings, excluding some items, will be 97 cents to $1.01 a share, in line with estimates of 99 cents.

The pandemic gave EBay a boost in 2020 as shuttered stores encouraged more shopping online, but the momentum is fading as people resume traditional spending patterns such as traveling and dining out. Inventory shortages tied to a global shipping crunch further cloud the holiday outlook. Chief Executive Officer Jamie Iannone, who took over last year, says EBay’s advertising and payments businesses can boost profits even if total spending on the site falls from pandemic highs. He faces intense competition from online retail giant Amazon.com Inc. as well as Canadian newcomer Shopify Inc.

EBay ended the quarter with 154 million active buyers, down 5% from a year earlier. Gross merchandise volume, which is the value of all goods sold on the site, declined 10% to $19.5 billion in the period ended Sept. 30. Analysts predicted $19.1 billion.

Third-quarter revenue increased 11% to $2.5 billion. Earnings, excluding some items, were 90 cents a share. Analysts estimated profit of 89 cents on sales of $2.46 billion.

The company also said it will expand its stock buyback program to $7 billion from $5 billion.

EBay has been divesting pieces of itself to appease activist investors discouraged by slow growth. In June EBay said it will sell just more than 80% of its South Korean online marketplace to local retailer E-Mart Inc. for $3 billion. The deal is expected to be completed by the end of the year or early in 2022.

(Updated with third-quarter performance in the fifth paragraph)