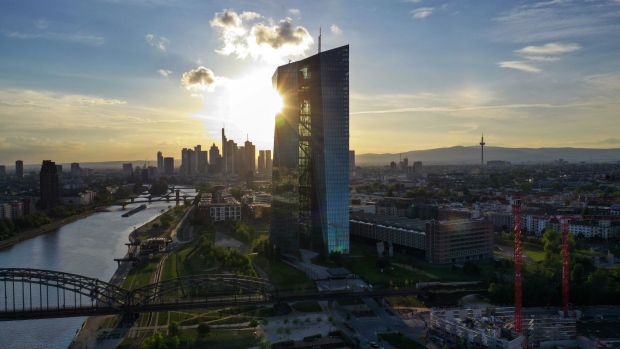 The setting sun reflects off the European Central Bank (ECB) headquarters on the bank of the River Main in this aerial photograph in Frankfurt, Germany, on Tuesday, April 28, 2020. The ECB’s response to the coronavirus has calmed markets while setting it on a path that could test its commitment to the mission to keep prices stable. Photographer: Alex Kraus/Bloomberg , Bloomberg

The European Central Bank has applied to trademark the term “digital euro” as officials prepare to release an assessment of the benefits and drawbacks of creating a digital version of the currency.

The application was filed on Sept. 22 by the ECB’s legal representatives Bock Legal, according to the website of the European Union Intellectual Property Office. An ECB spokesman confirmed the filing.

Central banks across the world have been experimenting with digital versions of their currencies, with the idea of safely adapting to digitizing economies. ECB policy makers have recently stressed the need to stay on top of global changes in payments -- both due to evolving technology and an increase in protectionism.

A team of experts from across euro-area central banks is due to publish an assessment soon. ECB President Christine Lagarde has repeatedly talked about the topic, and said in an address to the European Parliament last week that a public consultation will be launched within days.

“The Eurosystem has so far not made a decision on whether to introduce a digital euro. But, like many other central banks around the world, we are exploring the benefits, risks and operational challenges of doing so,” she said in a speech last month. “We have a duty to play an active role in balancing the risks and benefits of innovation in payments, so that money continues to serve Europeans well.”