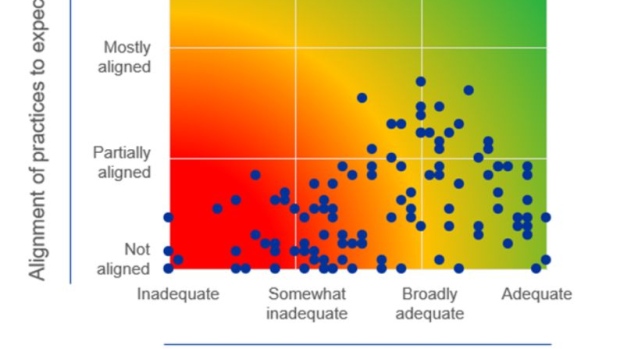 The European Central Bank’s review of climate risk in the finance industry found that Hamburg Commercial Bank AG has moved ahead of its peers in the euro zone, representing a stunning turnaround for a firm that was bailed out during the financial crisis.

“I was a little bit surprised, positively,” Chief Executive Officer Stefan Ermisch said at a conference in Frankfurt on Thursday. “We’re pretty well positioned here. At least the start of the mission we did well.”

The ECB sent its initial findings to individual banks, though it’s not clear others will follow HCOB’s lead and make them public. The supervisor has slammed the wider industry for so far failing to do enough to respond to the risks posed by global warming.

Ermisch showed a slide based on ECB material that reveals how banks are ranked according to their ability to meet the supervisor’s expectations for climate risk and the quality of their improvement plans. The slide also makes clear that there’s “big, big room for further developments” across the industry in coming years, he said.

The ECB is reviewing plans that cover 24 trillion euros ($29 trillion) of banking assets and will follow up with lenders that aren’t doing enough, according to Executive Board member Frank Elderson.

“The ECB will see to it that every bank is making expeditious progress in embedding climate and environmental risks into their institution by following up with supervisory requirements where needed,” he said at the conference. “This supervisory exercise will also offer banks a strong incentive to bolster their ability to identify and quantify their exposures to climate and environmental risks and their tolerance of these risks.”

The ECB will scrutinize the carbon intensity of bank loan books and trading operations in a stress test next year, but its wider review takes account of the qualitative measures they employ to assess and steer climate risk.

Ermisch has overhauled what was once a German poster child of financial mismanagement. Formerly known as HSH Nordbank AG, the bank required a taxpayer bailout in 2009, after a phase of aggressive risk-taking and deficient governance. HCOB is now best known for financing real estate, renewable energy and shipping.

The CEO, who oversaw the first privatization of a German Landesbank, said he’s “very optimistic” that HCOB will be able to take a key step in its overhaul by joining a deposit protection fund run by the country’s private banks.