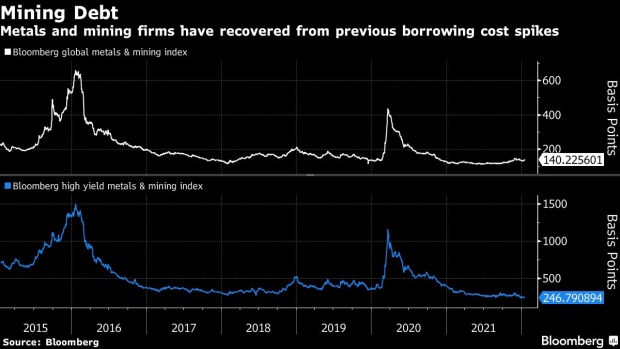 Cyclists use a cycle lane close to the European Central Bank (ECB) headquarters in Frankfurt, Germany, on Monday, Oct 25, 2021. The European Central Bank insists the current price spike will ease, though officials' most up-to-date view will be revealed at the rate decision, along with their assessment of an economy whose snapback from the pandemic is going awry. Photographer: Alex Kraus/Bloomberg , Bloomberg

(Bloomberg) -- European banks are finally getting a look at the unprecedented climate stress test their trading operations will face this year, and it’s not as stark as some of them anticipated.

This month, the European Central Bank sent banks details of the landmark test, including on how their trading books would handle a 50% drop in mining stocks over three years and a surge in fossil fuel companies’ credit spreads, according to people briefed on the scenarios. But some lenders and their advisers had braced for severe moves across a wide swath of industries beyond the most polluting sectors, said the people.

European authorities are pushing lenders to prepare for potential losses from extreme weather or government policies that could put polluting corporate clients out of business. The ECB is the first to also model the impact on trading books, though the exercise focuses on traditional securities and related hedging instruments rather than more complex and potentially riskier derivatives.

With leverage over the firms and households that make up the global economy, banks have a pivotal position in the effort to avert catastrophic climate change. They’re also under threat if the effects of a hotter planet spiral out of control. Lenders, investors and insurers representing $130 trillion in assets have now committed to decarbonizing their business by mid-century in recognition of the risks they face.

The ECB’s test will simulate an increase of about 470 basis points in credit spreads and a drop of about 50% in share prices for mining and quarrying companies over three years, the people said. Securities of coking coal and refined-petroleum producers face the next biggest shock, followed by those of the electricity and gas industry, they said.

If such movements were reflected in reality, the respective positions could hand the banks trading losses. The credit spread of a global Bloomberg index for investment-grade metals and mining companies averaged 124 basis points over the last year while one for high yield firms in the industry stood at 285 basis points. Both have recovered from previous spikes in their borrowing costs in recent years.

Still, that’s unlikely to cause distress at lenders unless they have out-sized holdings of the affected securities. In all, banks have been instructed to stress their holdings of stocks and bonds of companies to 22 industries in the test.

The ECB has made more severe assumptions in other parts of its examination which use a longer horizon. Bloomberg reported last week that the ECB told banks to brace for rapid fallout from global warming by simulating conditions expected for 2080 four decades earlier. The ECB is scheduled to brief banks on the test next week, according to the people familiar with the matter.

The test starts in March and runs until July with aggregate results due to be published in the third quarter.