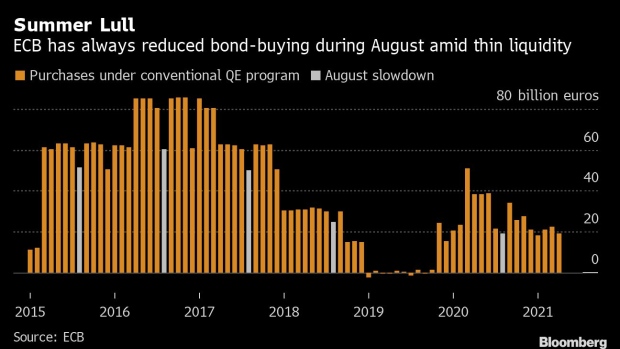 (Bloomberg) -- One way out of the European Central Bank’s dilemma about whether to slow pandemic bond-buying next quarter leads down a path policy makers have followed ever since quantitative easing started in 2015.

Thin liquidity in the summer months has prompted the ECB to reduce the pace of purchases each year, including during the pandemic. This technical necessity -- the central bank risks overwhelming the market otherwise -- might help President Christine Lagarde negotiate a compromise in what will be a heated debate at the Governing Council’s June meeting.

Ever since a decision in March to temporarily step up bond buying to ensure yields and credit rates remain low across the 19-nation euro area, some policy makers have argued that a strong economic rebound from lockdowns and an improving inflation outlook will allow the ECB to reverse course in the third quarter. Others prefer a more cautious approach, suggesting they’re open to even expanding the 1.85 trillion-euro ($2.2 trillion) program.

Both sides might be able to agree on reaffirming the ECB’s commitment to keep financing conditions favorable, while citing the market lull should they buy less. Policy makers have already showed during this year’s Easter holidays -- purchases declined just after the commitment to boost them -- that they’re not too concerned about temporary disruptions to their plans.

“They could agree to something more flexible -- adjusting the purchases gradually lower over the summer months,” said Jan von Gerich, chief strategist at Nordea Bank Abp. “Communication-wise though, it might be a challenge, since the recovery is unlikely to be on a solid foundation yet at the time of the June meeting.”

Von Gerich highlighted the seven-week window between when the ECB would make that decision and August, when bond markets are normally at their quietest. That means the central bank could maintain the current pace of purchases next month and allow them to naturally fall over the summer, before making an active decision on a slower rate in September, he said.

“The ECB will want to avoid fueling expectations that it will continuously do more,” said Katharina Utermoehl, senior economist at Allianz SE. “We’re looking at a strong recovery in the second half and the inflation outlook is improving. The ECB should be able to reduce purchases in the third quarter.”

The most important ingredient in June’s policy discussion will be updated projections for growth and inflation that are currently being compiled. That last set showed consumer prices growing at an average annual pace of just 1.4% in 2023, far less than the ECB’s goal of below, but close to, 2% -- and not yet back on the pre-pandemic track.

While business surveys signal a sharp pickup in price pressures amid surging commodities and logistical logjams, the underlying trend has weakened again. At the same time, nominal bond yields have increased and banks have tightened lending standards.

German 30-year bond yields surged to their highest level since 2019 on Tuesday, fueled by ample supply and inflationary fears. A market-derived gauge of bets on rising inflation in Germany rose to its highest level in almost seven years. Italian 10-year yields -- a key gauge of risk in Europe -- rose toward 1% for the first time since September.

“I don’t see how the ECB will be able to sell a slowdown in purchases given the inflation outlook and financial conditions,” said Nick Kounis, head of macro and financial-markets research at ABN Amro Bank NV. “Their goal will be to continue buying at the current pace, but they can easily argue it’s not significant if they don’t quite manage during the summer.”

Come September, the euro area’s recovery is expected to be in full swing, and policy makers might conclude there’s no need to go back to the current elevated levels. The ECB bought 80.1 billion euros worth of debt in April, the most since July.

That would mean they won’t spend the full amount, an option regularly highlighted by the officials who warned in the past against risks from offering ever more monetary stimulus. Governing Council member Martins Kazaks made the point in an interview last week, also arguing there’s no reason to believe emergency bond-buying will be extended beyond its March 2022 end-date.

“Exceptional bond purchases should not go on forever,” said Patrick Armstrong, a money manager at Plurimi Wealth LLP. A summer taper “could be an elegant way to taper without causing the tantrum.”