The European Central Bank sought to stave off a resurgent sovereign-debt crisis with the promise of a new tool to curb market stress, winning some respite just as investors shifted focus to an impending interest-rate increase by the Federal Reserve.

With Italian bond prices gaining after days of gyrations where at one point yields breached four per cent -- a level last seen during turmoil in 2014 -- a pledge by officials to devise a measure against turbulence while following the US with hikes of their own may have temporarily persuaded investors of their resolve.

“They have sent a signal that they have fully committed to ensure the functioning of the monetary-policy transmission,” said Piet Christiansen, chief strategist at Danske Bank. “They have also bought themselves some time.”

Despite the distraction of a big Fed decision driving financial-market volatility and ECB officials’ insistence that no tool was needed yet, speculation on Italian debt forced their hand to act at a hastily convened emergency meeting on Wednesday, the eve of a one-day holiday in Frankfurt.

First trailed as deliberations on the deployment of a first defense using reinvestments from their pandemic emergency bond purchase program, the discussion widened to the development of a broader strategy. Officials ultimately declared that they will speed up “the completion of the design of a new anti-fragmentation instrument.”

“The pandemic has left lasting vulnerabilities in the euro-area economy which are indeed contributing to the uneven transmission of the normalization of our monetary policy across jurisdictions,” the Governing Council said.

It’s not clear what timetable the ECB has in mind. Last week, policy makers pledged to stop bond purchases on July 1, and to deliver interest-rate increases at a decision three weeks later and in September. Christiansen at Danske suggests those two meetings are the most obvious moments for an announcement unless market events force a faster response.

“This should also give the ECB the opportunity to raise key rates more quickly and aggressively, as spread widening is limited to a certain extent,” said Ulrike Kastens, an economist at DWS International GmbH. She predicts an announcement in July.

Given the ECB’s previous record, it also could take much longer, especially if more hawkish members of the Governing Council object. With the central bank forbidden by treaty from conducting monetary financing, avoiding the creation of a tool that may incite legal challenges in countries like Germany is likely to be key. 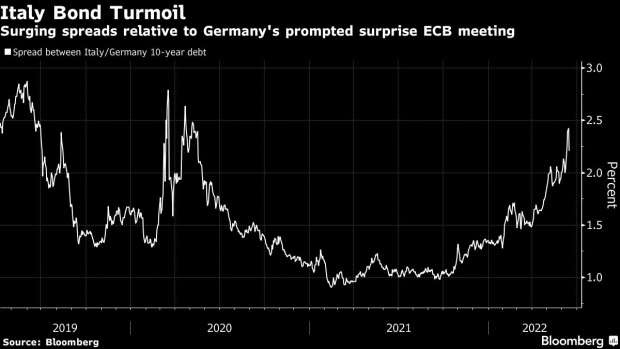 It took the institution years to devise a credible answer to the previous sovereign-debt crisis. Even then, when former President Mario Draghi sought to stem the turmoil with his so-called OMT tool, then Bundesbank President Jens Weidmann fought against it in court.

Given memories of the market volatility of those years, Italian officials have sought in vain to keep ambitions for rate increases in check.

On May 31, Bank of Italy Governor Ignazio Visco called for hikes to be “orderly.” Meanwhile Draghi -- now prime minister of Italy -- spoke out last Thursday, as the ECB met, to observe that there’s still spare capacity in the euro-zone economy and that inflation there is mainly supply driven.

An adviser of his, Francesco Giavazzi, went further in comments this week.

“The ECB is raising rates to respond to the increase in inflation with the wrong instrument,” he said at an event in Rome. “We don’t have inflation from demand like in the US but instead have inflation linked to gas prices.”

A different tool to address market stress would open a new chapter in the ECB’s relationship with bond markets, which has been fractious ever since debt-laden Greece first succumbed to turmoil more than a decade ago.

That crisis was ultimately tamed by the OMT program. Meanwhile market stress at the onset of the pandemic was addressed with another emergency bond-buying program.

Officials have repeated recently that they’re ready to devise new instruments as required, but have disappointed markets with a lack of detail on their plans.

“The first line of defense is flexibility” in PEPP reinvestments, he said in Milan. “If that doesn’t work we can resort to another instrument.”

Given that position -- as detailed by one of the more hawkish members of the Governing Council -- it’s no surprise that things haven’t been made clearer by this stage.

“I see today’s statement as the bare minimum of what could be expected,” Christiansen at Danske said. “But also the most realistic outcome.”