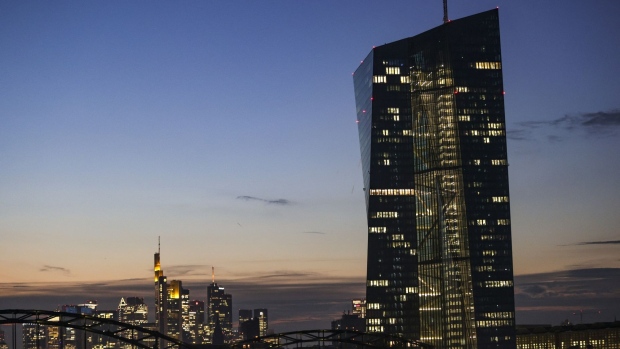 (Bloomberg) -- The future of European Central Bank stimulus is becoming clearer before December’s crunch meeting, with its pandemic bond-buying tool on track to be wound down as planned but stay available for reactivation if needed.

That’s the emerging consensus after weeks of public debate among officials who’ll gather in three weeks in Frankfurt against a backdrop of soaring prices and the abrupt re-imposition of lockdowns in parts of the continent -- factors that are casting a shadow over the recovery in the 19-member euro area.

The goal for policy makers will be to plot a path for post-crisis stimulus to ensure there’s sufficient support through the latest wave of infections, without risking too much inflation. Officials are ruling out an interest-rate increase in 2022, and they also want to retain the ability to respond quickly to shocks and avoid commitments over too long a time horizon.

Despite the rising threat from the virus, the loudest voices of late have struck a hawkish tone. Isabel Schnabel, a member of the ECB’s six-strong Executive Board, told Bloomberg this week that inflation risks are “skewed to the upside.”

Here’s what we’ve learned about the thinking before the Governing Council announces its decisions on Dec. 16.

Officials are coalescing around the idea that the pandemic emergency purchase program known as PEPP will indeed come to a halt on schedule in March. That intention was underscored this week by the release of an account of their last meeting.

Launched in the early days of the coronavirus crisis, the tool did away with many of the limitations that guided earlier bond buying, giving the ECB greater flexibility to combat market stress.

Now, policy makers must determine whether to ramp up regular asset purchases to smooth the transition, and work out to what extent they should retain some room to maneuver to address fragmentation on sovereign-bond markets.

Four officials -- Schnabel, Francois Villeroy de Galhau, Klaas Knot, and Robert Holzmann -- spoke out this week in favor of keeping that flexibility on hold within PEPP. That could mean a pledge to either restart purchases if necessary, or a more strategic use for reinvesting redeemed debt.

The flexibility within PEPP “has served us quite well,” Knot said Tuesday. “We will have to migrate that flexibility also to the reinvestment phase in order to prevent undue fragmentation.”

While Germany’s Bundesbank has warned price growth in the region’s top economy could approach 6% this month, officials are increasingly cautioning about upside risks to the longer-term outlook. At the December meeting, they’ll be presented with new forecasts, including a first look at how prices may develop in 2024.

Whether the current spike will continue to be seen as largely transitory will be crucial to the Governing Council’s decisions.

They may well opt to make stimulus plans with a shorter timeframe in mind. Ireland’s Gabriel Makhlouf was among those arguing this week for maintaining “optionality in our policy tools” so as not to become locked to commitments that put price stability at risk.

At the same time, some continue to sound a more subdued tone on inflation. Executive Board member Fabio Panetta even made the case that the short-term price spike could act as a “tax” on demand and pull the economy further away from absorbing excess slack, requiring more monetary-policy easing.

ECB officials across the board have pushed back against the idea that conditions for an interest-rate increase could be met next year. Investors are now pricing a first full 10 basis-point hike for February 2023.

One topic for discussion may be how long a gap to maintain between the eventual end of bond-buying and the first hike, though Schnabel downplayed the need for that debate to happen in December. She also said any continuation of long-term loans to banks could be determined later on. Villeroy agreed that some decisions could be taken beyond December.

But Schnabel -- who’s in the running to become Germany’s next central bank chief -- did argue that other tools and how the ECB communicates its reaction function will probably gain a more important role than bond-buying.

“There are, on the one hand, diminishing returns to asset purchases and, on the other hand, increasing side effects,” she said. “Eventually, there will be a shift from asset purchases toward other tools, most importantly our forward guidance.”