ECB Didn’t Go 'Shock and Awe' But May Not Be Done Yet, Kleintop Says

The European Central Bank cut interest rates further below zero and will start open-ended bond purchases as President Mario Draghi overcame critics of his stimulus policies to make a final run at reflating the euro-area economy.

The Governing Council reduced the deposit rate to minus 0.5 per cent from minus 0.4 per cent, and will buy debt at 20 billion euros (US$22 billion) a month starting Nov. 1. Banks will get exemptions from the negative rate for some of their deposits after an outcry from lenders about the squeeze on profitability. Draghi will hold a press conference at 2:30 p.m. in Frankfurt.

European Central Bank, acting quickly, Cuts Rates 10 Basis Points. They are trying, and succeeding, in depreciating the Euro against the VERY strong Dollar, hurting U.S. exports.... And the Fed sits, and sits, and sits. They get paid to borrow money, while we are paying interest!

The ECB now plans to keep rates at their present or lower levels until its outlook for inflation “robustly” converges to its goal of just below 2 per cent, having previously expected borrowing costs to stay unchanged until mid-2020. It also scrapped a 10-basis point rate premium it previously attached to long-term loans.

The announcement of a new stimulus package is a remarkable turn of events, just nine months after the ECB signaled it was done with ever-looser policy. Now inflation is running at barely half the goal of just under two per cent, and the manufacturing sector is in a contraction that risks spreading to the rest of the economy.

Hours before the decision, industrial-production figures showed the third quarter off to a weak start with euro-zone output dropping 0.4 per cent in July, more than expected. The decline was led by Germany, which is on the verge of a recession as a global slowdown in trade caused by the U.S.-China standoff and the uncertainties surrounding Brexit hurts its exporters. 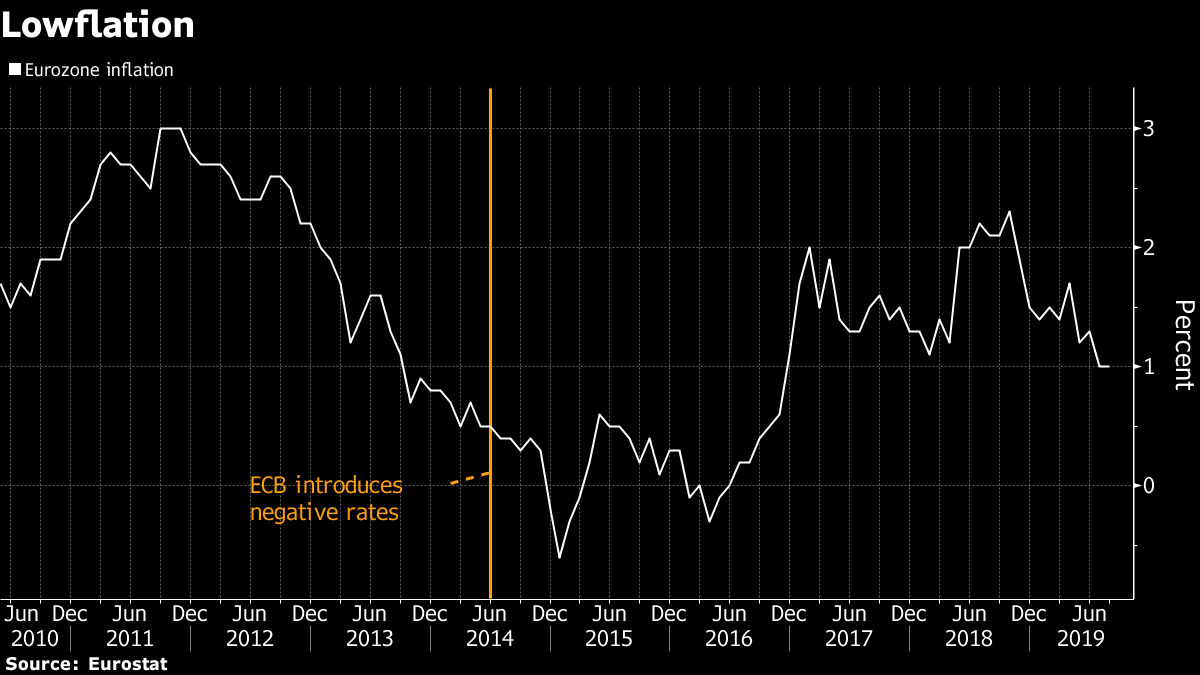 The approval of such broad measures is a win for Draghi in his penultimate meeting before he steps down next month. Governors from core economies including Germany and the Netherlands pushed back against the resumption of quantitative easing, saying it should be a last resort in case the outlook worsens.

Central banks around the world are easing to combat the spreading weakness, with the U.S. Federal Reserve likely to lower rates next week for the second time this year. The International Monetary Fund reduced its global growth outlook in July.

Still, there are doubts the ECB’s latest measures will prove as effective as hoped. Longer-term bond yields have already fallen sharply because of the economic slowdown, and another round of debt purchases might not exert much more downward pressure.