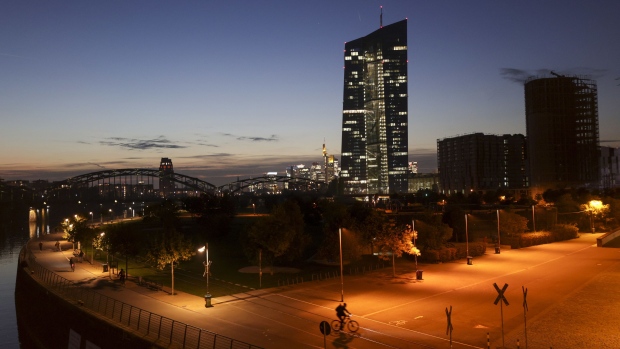 (Bloomberg) -- The continuing reliance of the European Central Bank’s securities lending facility strengthens the argument that it should replicate a prominent Federal Reserve tool used to alleviate collateral scarcity.

The aggregate balance of securities lent by the eurosystem was roughly 140 billion euros at the end of June from 118 billion euros the previous month, according to Deutsche Bank Securities, citing ECB data published Tuesday. Strategists also noted a proxy based on the central bank’s balance sheet that indicates usage has increased slightly during the July/August period.

Discussions are already underway as to whether a facility similar to the Fed’s overnight reverse repurchase agreement will eventually be introduced. A recent ECB working paper highlighted friction in the European repo market and concluded a tool like the RRP could improve the transmission of monetary policy to banks and non-financial institutions.

While the US version of the RRP is primarily limited to counterparties such as money-market mutual funds and government-sponsored enterprises like Fannie Mae and Freddie Mac, the ECB’s version could provide access to a much wider set of entities.

“Historically the ECB has shied away from providing non-bank entities access in order to avoid disintermediating banks, however non-banks are playing an increasingly important role in financial markets, and regulation has curbed disintermediation ability,” strategists led by Soniya Sadeesh wrote in a note to clients. “Such a facility would be a recognition of these changes in market structure.”

In the US, 99 counterparties parked $2.165 trillion at the Fed’s RRP operation Tuesday from $2.176 trillion the prior session, data show. Demand remains robust due to the continuing shortage of collateral in the funding markets, and as investors brace for the prospect of the US monetary authority rapidly raising interest rates.

Meanwhile, the Bank of England is creating the Short-Term Repo facility, a new tool to ensure its bond-selling program doesn’t disrupt short-term interest rates as the pile of bank reserves dwindle.