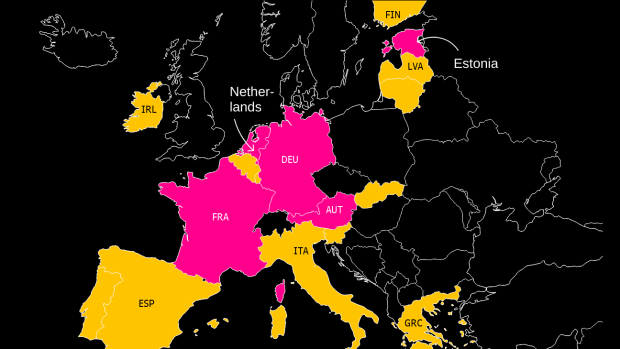 In a flurry of comments on Friday, two officials defended the stimulus unveiled by President Mario Draghi for the flagging euro-area economy. Arguing against it, Austrian central bank Governor Robert Holzmann said more QE was possibly a mistake, Dutchman Klaas Knot called it disproportionate and Jens Weidmann of the Bundesbank said the ECB went overboard.

Draghi’s success at Thursday’s meeting came despite opposition from both Germany and France, the region’s two largest economies. The split may cast doubt on the resolve of the Governing Council to persist with stimulus after Draghi leaves in November and is replaced by former IMF chief Christine Lagarde.

The public airing of grievances highlights tensions among policy makers, growing doubts about the effectiveness of stimulus, as well as concern about negative side effects. Among the speakers was Finland’s Olli Rehn, a supporter of Thursday’s package, who said unity on the ECB is important for credibility.

“It is always better to avoid excessive division, especially in public,” Rehn told Bloomberg Television in an interview. “We have normal debates within the Governing Council and it’s important we will retain unity in public appearances.”

In the countries of some dissenting governors, Draghi’s stimulus package provoked criticism. The Dutch finance minister lashed out against the decision to cut interest rate further below zero as detrimental for the country’s pension industry. Germany’s best-selling tabloid, Bild, branded Draghi as Dracula for sucking out the interest from savings. Weidmann told the paper on Friday he will make sure rate increases won’t be unnecessarily delayed.

The ECB’s commitment to buy 20 billion euros ($22 billion) of debt a month for as long as necessary is the main bone of contention among policy makers. Austria’s Holzmann, who joined the Governing Council this month, said the latest easing package is possibly an error and can be changed once Lagarde has taken over.

“I wouldn’t think it’s there for the next decades,” he said in an interview with Bloomberg Television on Friday in Helsinki. Lagarde is not “a weak person who’ll say I’m locked in one or the other way.”

Also speaking from Helsinki, Rehn countered that the ECB took a very good decision, which enjoyed a broad consensus. It was definitely not a mistake, he said, but the council’s best effort to counter the economic slowdown caused by worsening trade tension, “which has now turned to a trade war.”

Dutch governor Knot offered a different view. In an unusual statement on Friday, he argued there were sound reasons to doubt that the package, especially the asset-purchase program, would be effective. Increasing scarcity of low-risk assets and excessive risk-taking in the housing market are reasons for concern.

Low inflation is “worrying, but it does not imply that restarting a far-reaching measure such as the APP is the appropriate instrument,” Knot said.

The war of words between the governors points to fundamental differences in how they see the economic situation developing -- with their judgment potentially colored by disparate conditions in their own economies.

While German manufacturing is in recession, the domestic economy remains buoyant and unemployment near a record low. The Netherlands is grappling with a boom on its real-estate market. Italy needs interest rates to remain low to deal with its massive public debt.

Latvian governor Ilmars Rimsevics insisted the ECB’s arsenal is well-stocked and said he would favor even more purchases of government bonds if needed. He also echoed Draghi’s comments that governments with fiscal space should step up spending and help boost the economy.

“The ECB simply can’t do it alone,” Rimsevics, who is stepping down in December, told Bloomberg in a separate interview. “It will be the job for the next ECB president to convince governments also to do more structural reforms.”

The public exchange of views between policy makers is set to last well into the next week. ECB chief economist Philip Lane, who proposes policy at Governing Council meetings, will speak in London on Monday and in Luxembourg on Tuesday. French governor Francois Villeroy de Galhau, who unexpectedly opposed QE on Thursday, is due to appear three times.

To contact the editors responsible for this story: Paul Gordon at pgordon6@bloomberg.net, Jana Randow, Fergal O'Brien