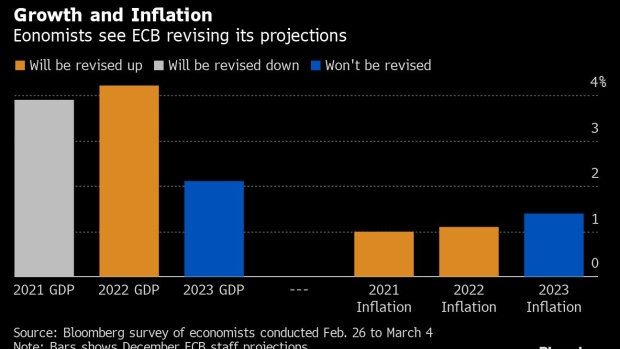 (Bloomberg) -- The European Central Bank’s forecasts this week are likely to justify the current stimulus program with a cautious view that envisages no sustained jump in inflation, according to officials with knowledge of the matter.

The outlook that will be presented to policy makers assumes that hoarded savings won’t be depleted in a sudden consumption boom when lockdown restrictions ease, said the officials, who asked not to be identified discussing confidential matters.

Chief Economist Philip Lane will present projections compiled by ECB staff to the Governing Council before President Christine Lagarde then unveils them at her press conference after the institution’s latest monetary decision on Thursday. The outlook is never official until agreed on by policy makers.

The ECB’s forecasts assume spikes in consumer prices at the start of the year will be temporary, speeding up inflation in 2021 but not in subsequent years, the officials said. That means revisions from the December projections may be minimal, they said, leaving scope to accommodate upside surprises.

With a global jump in bond yields focusing ECB minds, policy makers are likely to spend much of their meeting discussing how that might hurt the euro region’s recovery even before it has begun. Economists anticipate the pace of bond-buying will accelerate to try to offset the impact of that move. The institution has yet to spend almost half of its signature 1.85 trillion-euro ($2.2 trillion) pandemic purchase plan.

Policy makers are considering whether to adapt their communication in light of the recent bond-market rout, according to the officials, who didn’t elaborate on what that might entail.

Lagarde has emphasized the need for financing conditions across the economy to remain favorable. How to measure and interpret them is the focus of a seminar for policy makers on Wednesday, the officials said.

An ECB spokesman declined to comment on the forecasts.

The shift in bond markets has prompted diverging views from Governing Council members on how that could affect growth prospects. Some including Executive Board member Fabio Panetta have warned that the economy is fragile and nowhere near able to cope with higher yields. Dutch Governor Klaas Knot was among officials highlighting optimism about the outlook as one reason for the latest market shifts.