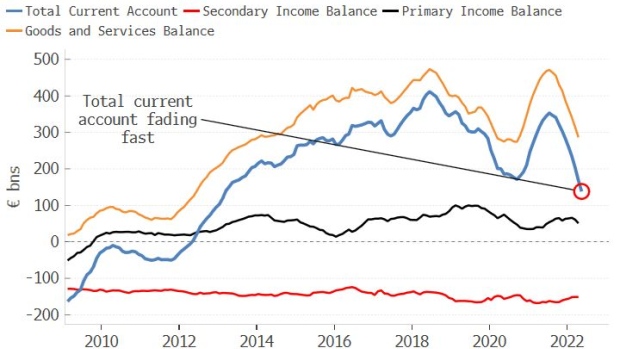 The European Central Bank (ECB) headquarters in Frankfurt, Germany, on Monday, May 23, 2022. While ECB policy makers have increasingly coalesced around the prospect of a first hike at their July 21 meeting in recent weeks, they have barely mentioned the possibility of a more aggressive half-point move such as the US Federal Reserve delivered this month. , Bloomberg

The ECB is facing a dilemma more commonly the bane of EM central banks. But Europe cannot afford to be complacent. Capital outflow is a considerable risk when your currency is severely compromised by an acute energy dependence, as the euro is today.

Europe’s once formidable balance-of-payments surplus with the rest of the world is diminishing rapidly. For most of the 2010s, the euro zone ran the the world’s second-largest trade surplus, driven by Germany. But the sharp rise in energy prices has eroded this at breathtaking speed, with the region’s trade account now in deficit.

This would be problem enough, but Europe is also facing a recession. One of the best signifiers of recession in Europe is real M1. Real M1 growth fell rapidly before the last two euro-zone recessions. Over the last year real M1 has collapsed and is now contracting on an annual basis.

This puts the ECB in a bind. The euro zone’s current-account surplus was a natural pillar of support for the euro. Now this support has been removed the ECB will likely be forced to raise rates more than it otherwise would have, exacerbating the downturn.

The canonical EM crisis was the Asian financial crisis in the late 1990s. Short-term rates had to be jacked higher to prevent further capital flight, even though the domestic economies were on their knees. Indonesia, for instance, raised short-term rates to over 80%. But to no avail, capital continued to exit the economies, currencies collapsed, and current accounts surged into surplus -- but for the unhealthy reason of a collapse in imports.

A key difference is, of course, the euro is not pegged, as the rupiah, baht and ringgit were in the 1990s. But the euro is emphatically not benefiting from the stealth erosion of dollar dominance (as Barry Eichengreen and others highlighted in a recent IMF paper). The euro as a share of international reserves has flat-lined in recent years even as the dollar’s share has fallen, with the pick-up taken by non-traditional reserve currencies.

The risk of capital outflow will keep the ECB hawkish in the face of weak economic data, with short-term rates biased higher while the balance-of-payments is fragile.