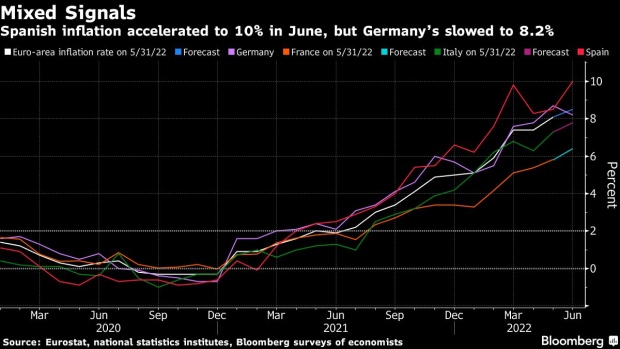 In Germany, cuts in fuel duty and discounted public-transport tickets have helped slow the surge in prices. , Bloomberg

(Bloomberg) -- European Central Bank policy makers preparing for the first interest-rate increases in more than a decade were handed conflicting signals on the inflation they’re trying to curb as price growth unexpectedly hit a record in Spain while easing off in Germany.

With the measures implemented in Berlin being temporary in nature, inflation may yet resume its advance. Either way, the dip won’t sway ECB officials from plans to normalize monetary policy after years of subzero rates and trillions of euros of asset purchases.

At their annual policy retreat in Sintra, Portugal, talk has been of whether a half-point hike -- twice the planned size -- could be warranted when the cycle of increases kicks off in July. Proponents can cite inflation topping 20% in one corner of the 19-member euro zone, alongside the Federal Reserve’s recent 75 basis-point hike.

If a worsening in the data “points to the persistence of inflation, to its acceleration, 50 basis points should be a policy option for July,” Governing Council member Gediminas Simkus said in an interview.

So far, ECB President Christine Lagarde says a quarter-point increase remains the base case -- something her Belgian colleague Pierre Wunsch, in an interview, called a “done deal.” Beyond that, a half-point move remains the likeliest outcome for the following meeting, in September, if the inflation backdrop doesn’t improve in the interim.

Data from France on Thursday and Italy and the euro area itself on Friday will shed more light on where prices are going. But there’s little hope among analysts of a region-wide dip until closer to year-end. Economists surveyed by Bloomberg estimate euro-zone inflation quickened to a fresh all-time high of 8.5% in June. It hasn’t slowed in a year.

It’s not just prices that are troubling policy makers. The growing threat of a Russian energy cutoff is stoking fears of a recession in Germany, the bloc’s biggest economy, with separate data Wednesday revealing increased pessimism in the outlook among households.

Then there are the market jitters that prompted the ECB to hold an emergency meeting this month. Investors worry that it will be difficult to lift borrowing costs while keeping the bond yields of indebted member-states in check.

Officials are working on a tool to prevent what they call fragmentation on government-debt markets and, in the meantime, are allowing leeway in reinvestments from a portfolio of bonds accumulated through emergency buying during the pandemic.

The new fragmentation instrument is the source of most speculation. While there are differences over the circumstances in which it should be deployed and the conditions it should carry, policy makers largely agree it’s needed to ensure their inflation-fighting efforts can be effective.

It’s important that fragmentation “should not stand in the way of monetary policy normalization,” ECB Governing Council member Martins Kazaks said in an interview.

In her opening speech on Tuesday, Lagarde spoke even more strongly.

“We will ensure that the orderly transmission of our policy stance throughout the euro area is preserved,” she said. “We will address every obstacle that may pose a threat to our price-stability mandate.”