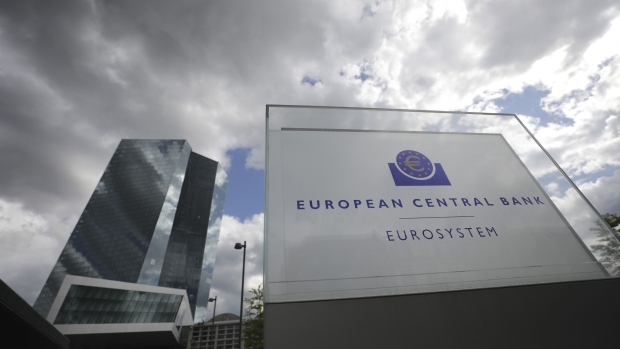 ​The European Central Bank intensified its response to the “unprecedented contraction” facing the euro area with a bigger-than-anticipated increase to its emergency bond-buying program.

President Christine Lagarde and her colleagues decided to expand purchases by 600 billion euros (US$675 billion) to 1.35 trillion euros, and extended them until at least the end of June 2021. Italian bonds rallied, with the yield on 10-year debt compared with the German equivalent set to narrow the most since mid-May. The euro reversed losses.

“Action had to be taken,” Lagarde said in a press conference. While there are nascent signs of the downturn bottoming out, “the improvement has so far been tepid.”

The vast majority of economists surveyed by Bloomberg last week had predicted a boost of 500 billion euros. Still, some said after the decision that the ECB will have to act again, perhaps as soon as September.

Lagarde revealed sweeping downward revisions to the ECB’s projections for growth and inflation in the region. In 2020, the bloc will likely see a contraction of 8.7 per cent before rebounding by 5.2 per cent in 2021. Under a more severe scenario with a strong resurgence of infections, output could shrink by as much as 12.6 per cent this year.

Inflation, which she said is the ultimate justification for the stimulus, will accelerate only slowly, and is seen averaging 1.3 per cent by 2022 -- far below the goal of just under 2 per cent.

The ECB action reflects how Europe is finally stepping up with powerful plans to drag the economy out of its worst recession in living memory. Germany announced a new 130 billion-euro fiscal package late Wednesday, the latest in a raft of national programs, and the European Union has proposed a 750 billion-euro joint recovery fund that leaders will discuss later this month.

It also shows Lagarde is determined to act preemptively -- only about a third of the pandemic program had been spent before Thursday’s increase -- to keep markets stable, building on the strategy of her predecessor Mario Draghi. She got off to a shaky start in the pandemic when she inadvertently suggested she might not step in to calm bond volatility in stressed economies such as Italy.

“This is a bit of an economics-policy fireworks -- last night the German government with an enormous fiscal stimulus package, and now the ECB,” Carsten Brzeski, chief euro-region economist at ING, told Bloomberg Television. “This is huge.”

With so much debt being issued by governments, economists at ABN Amro, JPMorgan, Banque Pictet & Cie and Nordea said the ECB will have to expand its bond purchases again later this year to soak it all up.

For now though, the central bank’s actions should keep a lid on borrowing costs for governments though. The central bank said buying will be conducted in a “flexible manner over time, across asset classes and among jurisdictions.” The proceeds from maturing bonds will be reinvested at least until the end of 2022.

“The large expansion of the Pandemic Emergency Purchase Programme creates a huge reserve of fire power to stimulate the economy and prevent any countries in the euro area from being engulfed by a sovereign debt crisis.” - David Powell and Maeva Cousin. read their ECB REACT

The central bank had already sweetened the terms of its liquidity operations in April so that lenders keep extending credit to companies, many of which have seen their revenues eroded by the shutdowns to limit the spread of the virus. Policy makers have refrained from cutting interest rates further below zero amid opposition to negative rates from banks and some politicians.

Lagarde said policy makers didn’t discuss whether to include junk-rated debt in its asset purchases, aside from the exceptions currently being granted to Greek government bonds. She said the decision to act was unanimous, but the exact parameters ultimately decided were the result of a “broad consensus.”

She pushed back against concerns that scope for action could be limited after a German court ruling last month questioned the legality of an older, still-active bond-buying program, saying she’s “confident that a good solution will be found.”