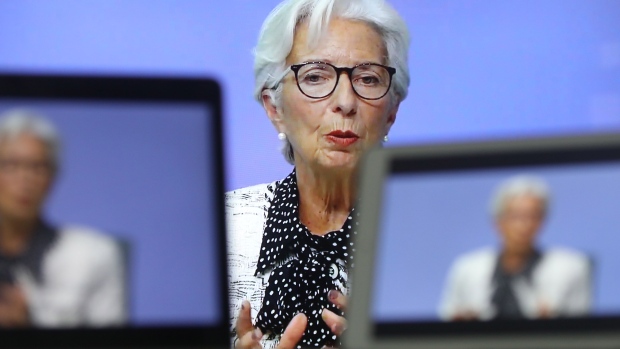 The European Central Bank left its crisis-fighting tools unchanged, asserting that its current stimulus settings are powerful enough to put the economy on track for a rebound later this year.

The Governing Council kept the size of its pandemic-bond buying program at 1.85 trillion euros (US$2.2 trillion), confirming that purchases will run at an elevated pace in the current quarter.

Officials also held the deposit rate at -0.5 per cent and said they will continue to provide long-term loans to banks to keep credit flowing to businesses and households.

President Christine Lagarde will hold a virtual press conference at 2:30 p.m. Frankfurt time, where she’s likely to be quizzed about how long the ECB plans to keep its stimulus in place after vaccinations allow lockdowns to ease and a euro-zone recovery takes hold.

At its last meeting in March, the ECB pledged to significantly step up asset purchases to contain the fallout of a government-bond sell-off that was driven by a speedy U.S. economic recovery from the coronavirus pandemic. Such market moves pose a risk to euro-zone activity, as sovereign yields are used as a reference for the cost of bank loans to companies and households.

Officials have spent an average net 17 billion euros per week under their pandemic program since then, up from about 14 billion per week in the first weeks of 2021. The aim is to keep borrowing costs for companies, households and governments across the euro area favorable during the pandemic. Net purchases are currently set to last until the end of March 2022.

More than 60 per cent of economists in a recent Bloomberg survey expect the ECB to stick to that timeline, despite regular pledges from officials that they will extend and expand the program if needed.

“The most logical action for Lagarde at the press conference is probably to express cautious optimism on the economic outlook without providing many hints on the pace of weekly PEPP buying beyond 2Q.”

The European Union has significantly stepped up its pace of vaccinations in recent weeks, smoothing the path for an economic rebound that’s expected to gain strength in the second half of the year. For now, wide parts of the bloc are still facing severe restrictions to fight an elevated level of infections.

Lagarde may also be asked about the ECB’s plans for winding down emergency stimulus, as well as the institution’s ongoing strategy review. The latter, which includes a likely revision of the central bank’s “below, but close to 2 per cent” inflation target, is set to produce results by September.

The timetable risks clouding the outlook for investors trying to judge the ECB’s intentions for policy during the recovery phase. That raises the specter of volatile borrowing costs -- a so-called taper tantrum -- that could undermine the region’s bounce back from the virus lockdowns.

France’s Francois Villeroy de Galhau has proposed a transition from pandemic bond-buying to an “adapted” version of an older purchase program, while maintaining negative interest rates, long-term bank loans and explicit guidance on its inflation tolerance.