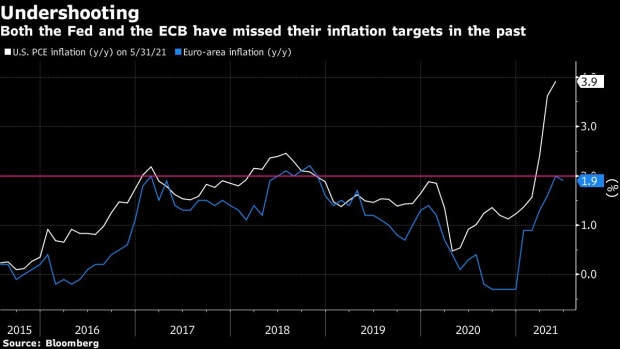 (Bloomberg) -- The European Central Bank took a step in the Federal Reserve’s direction with its new inflation target of 2%, while stopping short of a similar commitment to let the economy run hot after a recovery.

In announcing the results of its own long-running strategy review on Thursday, officials in Frankfurt said their new simpler approach “may also imply a transitory period in which inflation is moderately above target.” That contrasts with an explicit commitment from their U.S. counterparts to aim for a rate above its target after a period of weakness.

“Are we doing average inflation targeting like the Fed? The answer is no, very squarely,” ECB President Christine Lagarde said in a news briefing. “There are multiple ways to deal with the effective lower bound,” she said, referring to interest rates that are so low that central banks risk running out of ammunition.

The Fed last year decided to pursue an “average” 2% target, meaning it will let inflation overshoot during an economic upswing to make up for past shortfalls. The ECB decided to move away from its old goal of “below, but close to, 2%,” which was seen as vague and was drafted at a time when excessive price pressure was the main concern, not the opposite, as has been the case in the euro area in recent years.

The difference between the two central banks “is important,” said Carsten Brzeski, an economist at ING in Frankfurt. “You’ll get more extreme monetary policy in the U.S.”

While the change to the inflation target implies an even longer period of loose policy from the ECB, officials also said they will pay greater attention to the costs of owner-occupied housing, which currently isn’t reflected in official inflation numbers. Bloomberg Economics estimates this could add about 0.1-0.2 percentage point to inflation, neutralizing the change to the wording.

The ECB’s new “symmetric” goal will trigger an “especially forceful or persistent” response from the central bank in case of a negative economic shock, so that low expectations about the outlook for prices don’t become entrenched, Lagarde said. She didn’t specify for how long or by how much this approach could lead inflation to overshoot the 2% target.

Key ECB officials have recently voiced their concern about the Fed’s goal of seeking an average inflation rate over time. Bundesbank President Jens Weidmann said that the central bank could be seen as catering to indebted governments if it doesn’t tighten policy when inflation is running above its target. Executive Board member Isabel Schnabel has said that inflation could increase more quickly than expected, in which case it would be questionable “whether it will actually be possible to raise rates as quickly as would be needed.”

“The Governing Council refrained from following the example of the Federal Reserve by adopting average inflation targeting. In other words, the ECB won’t aim for inflation to exceed its target temporarily, with the purpose of making up for low inflation in the past.”

Economists have said that with an average target, it could be difficult to find an agreement on exactly how much price growth to allow within the ECB’s 25-member Governing Council, which has witnessed intense arguments over the direction of monetary policy in the past.

The Fed itself has faced questions about the discretion it gave itself in the new framework. Instead of laying out quantitative metrics on inflation, for instance, the new policy states that inflation will be allowed to overshoot 2% “for some time.”

“We really have to wait in both cases to see how seriously they implement their new targets,” said Brzeski.