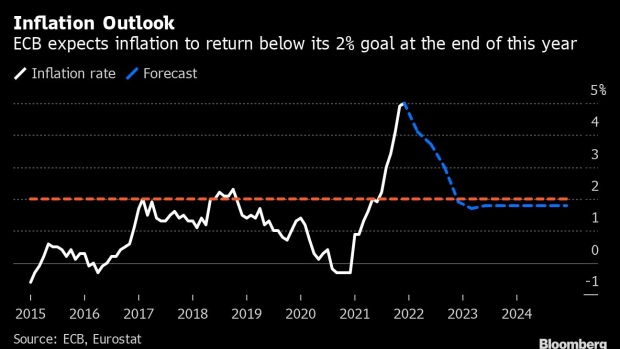 The European Central Bank should be preparing for a shift in monetary policy now to prevent the need for more aggressive action later that leads to financial-market turmoil, according to a former Federal Reserve official.

Inflation in the euro area is likely to be stronger than the ECB predicts and policy makers can’t afford to keep insisting that price pressures will be transitory, said Randy Kroszner, a Fed governor from 2006 to 2009. That said, a rate hike is probably still a “long way off.”

“The ECB needs to be ready to pivot,” he said in an interview. “Risk management would suggest that they think carefully about how they could talk about an alternative, even if they don’t think that that’s the most likely forecast, because the greatest risk is having to pivot quickly and have tumult in the markets.”

While Fed officials are poised to tell investors later on Wednesday to brace for rate liftoff in March, their euro-zone counterparts have insisted that hikes this year aren’t in the cards. The ECB’s most recent projections show inflation -- currently at a record 5% -- below its 2% goal after this year.

“I do think that there’s going to be more price pressure within the euro zone than the ECB is taking into account at the moment,” said Kroszner, who’s a professor at the University of Chicago Booth School of Business. He pointed to supply bottlenecks that could tighten yet again as Covid-19 shutdowns ripple through China and much of Asia.

Central banks can’t fix those disruptions, he said. “But that doesn’t mean that they shouldn’t be worried about the consequence of those ubiquitous supply shocks leading to broad price increases that then lead to increased wage demands that could lead to inflation expectations rising and inflation becoming entrenched.”

According to Governing Council member Gediminas Simkus, the ECB has no need to change its assessment of the inflation outlook at this point. The central bank’s next policy decision is just over a week away.

“They may have painted themselves into a bit of a corner,” Kroszner said.

After years of too-low inflation, officials are trying to lift expectations, and also prove that they won’t repeat past mistakes of tightening policy too soon.

“In the short run, you can do that,” Kroszner said. “The challenge is when the reality deviates significantly from the rhetoric and at some point, you either lose credibility, or you need to pivot.”