European Central Bank President Christine Lagarde renewed a pledge to deliver faster bond buying even as officials acknowledged for the first time since 2018 that the euro-zone economy is no longer overshadowed by risks to its growth outlook.

“A sustained rise in market rates could translate into a tightening of wider financing conditions,” Lagarde said on Thursday, explaining why officials committed to keep asset purchases at a “significantly higher” pace than in the first months of the year. “Such a tightening would be premature and would pose a risk to the ongoing economic recovery.”

Lagarde and her colleagues combined that cautious approach with an improved outlook on growth for this year and next, along with their first assessment of “broadly balanced” risks for the euro region since December 2018, when Mario Draghi was leading the institution.

Those contrasting perspectives may reflect a compromise among officials that underscores the ECB’s determination to entrench a rebound, while accommodating a rapidly shifting outlook as economies reopen. Lagarde said there were “a couple of diverging views” on how fast to keep buying bonds, adding that it’s still “too early” to discuss when the emergency program should end.

“Characterizing the risks as being ‘broadly balanced’ while maintaining a higher pace of purchase is a clear win for the doves,” said Rishi Mishra, an analyst at Futures First. “The only saving grace for the hawks is the prospect of a reduction in pace in September.” 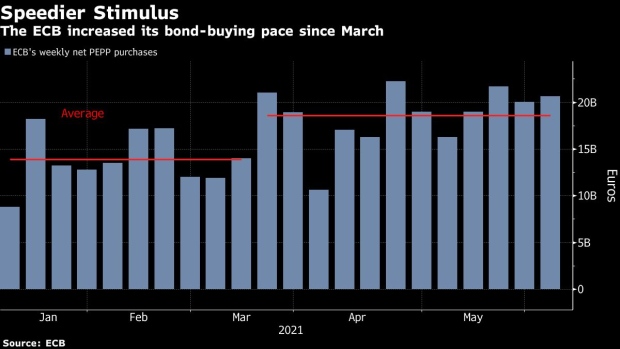 The decision on Thursday provides a foretaste of the kind of evaluation that colleagues at the Federal Reserve might do next week, when they too are likely to recommit to more stimulus for now.

“On the one hand, an even stronger recovery could be predicated on brighter prospects for global demand and a faster-than-anticipated reduction in household savings once social and travel restrictions have been lifted,” Lagarde said. “On the other hand, the ongoing pandemic, including the spread of virus mutations, and its implications for economic and financial conditions continue to be sources of downside risk.”

ECB policy makers accelerated the pace of their 1.85 trillion-euro (US$2.25 trillion) bond-buying program three months ago to rein in rising borrowing costs, and several argued before the meeting that the economy isn’t ready for a withdrawal of support, setting the scene for a repeat pledge.

Purchases have been conducted at a pace of roughly 19 billion euros a week since March, up from 14 billion euros earlier in the year. Thursday’s decision suggests they are likely to continue at or close to that higher clip until the recovery firms. Most economists don’t expect a reduction until September.

“The European Central Bank under President Christine Lagarde has again shown its determination to provide the euro-area economy with plenty of monetary stimulus to grease the wheels of recovery.” - David Powell.

While Lagarde also unveiled forecasts that showed faster growth and inflation both this year and next, she insisted that price pressures in the economy “remain subdued.”

The ECB’s decision was paired with a more optimistic outlook for growth in 2021 and 2022. Policy makers both in the euro zone and in the U.S. argue that prices are being driven by temporary factors including higher fuel costs and manufacturing bottlenecks that will be resolved before too long. 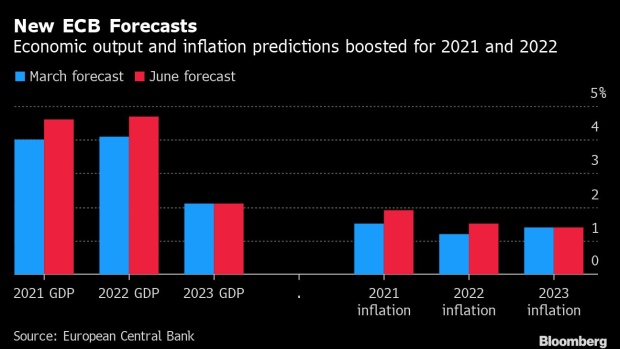 In the euro area, inflation climbed to two per cent in May, technically above the ECB’s target. The institution’s last forecasts, however, showed it missing its goal both next year and in 2023.

As Lagarde started speaking, the U.S. published figures showing inflation there jumped to five per cent in May, stoking concerns that price gains might become entrenched. The Federal Reserve says it expects them to be temporary.

ECB officials have repeatedly warned that it is too early for a debate around winding down pandemic measures. The ECB’s emergency program is currently set to run through March 2022, and most economists don’t expect it to be extended.

Alongside the decision on crisis purchases, officials left interest rates, long-term loans to banks, and an older bond-buying program unchanged.