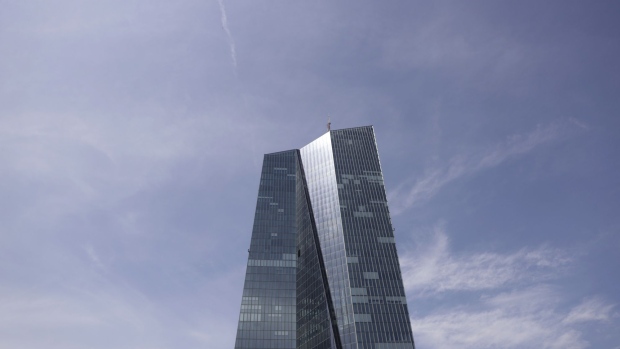 The European Central Bank (ECB) headquarters in Frankfurt, Germany, on Monday, May 23, 2022. While ECB policy makers have increasingly coalesced around the prospect of a first hike at their July 21 meeting in recent weeks, they have barely mentioned the possibility of a more aggressive half-point move such as the US Federal Reserve delivered this month. Photographer: Alex Kraus/Bloomberg , Bloomberg

(Bloomberg) -- The European Central Bank is exploring ways to prevent banks from earning windfall profits from the subsidized lending program it launched during the pandemic, once it raises interest rates later this month, according to a report Sunday by the Financial Times.

The ECB provided €2.2 trillion of subsidized loans to banks during the Covid-19 crisis to avoid a credit crunch. With rates set to hike, that will provide extra profits worth up to €24 billion for euro area lenders, the FT said, citing analysts.

The ECB’s governing council is planning to discuss how to curb the extra margin banks could earn, by placing them back on deposit at the central bank, the FT reported, citing people familiar.

The ECB is planning on its first interest-rate hike since 2011, having announced already in June details on planned rate increases in July and September with more to follow.

Providing taxpayer-backed profits to banks while raising borrowing costs for households and businesses would be “politically unacceptable” for the ECB, the FT reported.