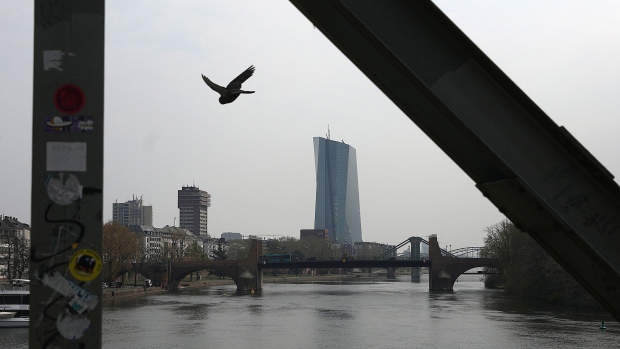 The European Central Bank (ECB) headquarters stand beside the River Main in Frankfurt, Germany, on Wednesday, April 10, 2019. The ECB's policy update is only one of several important gatherings this week in the realm of global economics. , Bloomberg

(Bloomberg) -- The traditional relationship between inflation and employment that has guided monetary policy still holds in the euro area, according to a paper published by the European Central Bank.

Using a “battery of 630 theory-driven models,” researchers found that the so-called Phillips Curve is alive in the 19-nation region despite the recent financial crisis -- even if its slope has become relatively small.

The study, released on Wednesday, also shows expectations were the single most important determinant of core inflation. Their negative effects receded after the ECB launched its bond-buying program.

The relevance of the Phillips Curve for setting monetary policy has been questioned after falling unemployment failed to produce a meaningful rebound in inflation in many developed economies. ECB chief economist Philip Lane said last week the curve was still a useful framework, but policy makers were looking at its different specifications rather than relying on a single version.

Handle with care is also an approach the paper recommends.

“Overall, we conclude that the Phillips Curve is still a valid policy instrument once it is robustly estimated,” its authors Laura Moretti, Luca Onorante and Shayan Zakipour Saber conclude.

To contact the editors responsible for this story: Paul Gordon at pgordon6@bloomberg.net, Jana Randow, Carolynn Look