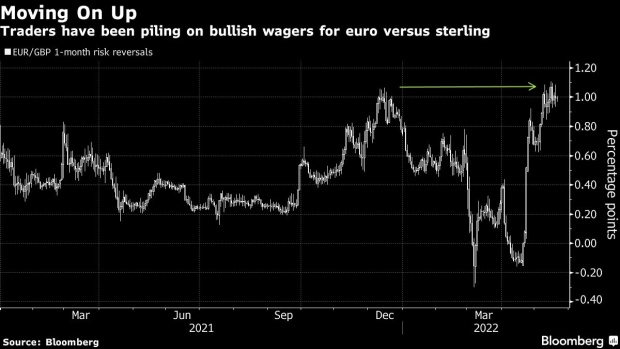 The light trail from a euro sign sculpture is seen in this long-exposure photograph taken outside the European Central Bank's (ECB) headquarters in Frankfurt, Germany, on Tuesday, Oct. 30, 2012. The European Central Bank said euro-area banks increased tightening of credit standards to businesses in the third quarter and expect a similar degree of tightening in the fourth. Photographer: Bloomberg/Bloomberg , Bloomberg via Getty Images

The dramatic weakness in the euro is getting a lot of attention at the European Central Bank, but the market isn’t noticing.

More hawkish commentary from the ECB and talk about a 50 basis-point hike, should theoretically support the euro. But this time, other forces, such as the supremacy of the dollar and fears about a recession, are dominating the market, strategists say.

While policy makers aren’t targeting the exchange rate, its slide toward dollar parity is increasingly a hot topic of debate. In recent days, Banque de France’s Villeroy de Galhau pointed out that a weaker currency would go against the price stability objective. Executive board member of the ECB, Isabel Schnabel, said that they were closely monitoring the impact of weaker euro-dollar exchange rate on inflation.

“Verbal intervention may increase intraday volatility but it’s going to have little impact on the exchange rate,” said Vasileios Gkionakis, head of European FX strategy at Citigroup. “We are still living in a risk-off world.”

The euro jumped this week, but that’s been down to a broad selloff in the dollar and signs of vulnerability in the US economy. It was around $1.05 on Friday, near a five-year low.

Traders have a track record of dismissing ECB statements on the exchange rate that haven’t been backed up with policy. Last year, officials said they had tools to prevent any further strengthening of the euro undermining inflation, but these comments had little lasting effect, according to Credit Agricole SA’s Valentin Marinov.

“Talk is cheap most of the time,” said Marinov, the bank’s head of G-10 FX research. “Any verbal intervention from here to strengthen the euro will work to the extent that it comes hand in hand with concrete policy actions to prop up the currency.”

It’s rare for politicians and central banks to push for a stronger currency. Usually, a weaker exchange rate is welcomed as it drives up growth by making a country’s exports more attractive. But in this high inflation world, a stronger currency is viewed as a way to offset rising import prices.

A 5% drop in a euro trade-weighted index could add as much as 0.5 percentage points to inflation, according to JPMorgan Asset Management.

To some traders, ECB statements on the euro are a way to read whether they’re hawks or doves. Policymakers who shrug off a strong currency are likely to be more focused on stimulating growth.

They point to statements from Executive Board member Fabio Panetta, who said earlier this month that there’s “limited impact” of a few percentage points of appreciation in the euro, and that a strong currency would squeeze growth.

Still, the more hawkish tone there is coming from ECB policy makers should help the euro win against other currencies where ratesetters are more focused on growth over inflation, such as Japan, China and the UK, according to Goldman Sachs Group Inc. The euro-pound pair could rise to 0.88 in three months, from around 0.84 now, according to Kamakshya Trivedi, co-head of global foreign exchange and interest rates.

“People always look at the euro versus the dollar and are disappointed that verbal intervention is not having more of an impact,” he said. “But with the US delivering 50 basis-point hikes, it’s a high bar to beat.”