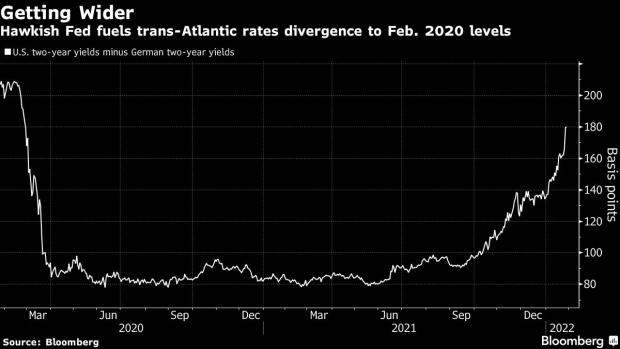 A cyclist rides past the European Central Bank (ECB) headquarters beside the River Main in Frankfurt, Germany, on Thursday, June 17, 2021. European Central Bank Chief Economist Philip Lane signaled that policy makers may not have all the data they need by September to start shifting policy away from the current ultra-loose stance. , Bloomberg

The European Central Bank’s go-slow approach to monetary policy tightening is putting a wall around local bond markets against the global turmoil sparked by its U.S. counterpart.

Federal Reserve Chair Jerome Powell this week shook equity and bond trading as he opened the door to faster interest-rate hikes than anticipated. It was the death knell for the so-called Fed put, the notion that central bankers would amend the course of monetary policy to halt a severe market decline.

It’s a sharp contrast with the ECB, which isn’t expected to raise rates until the second half of 2023, offering the euro area -- and its peripheral bond markets -- some degree of protection.

Sure, European bonds have been caught up in the selloff and key spreads have widened. Yet when compared to global peers, rates are set to remain lower as the ECB’s relative dovishness keeps markets in check. That should mean a weaker euro, something officials might also welcome as a cushion to help the region weather fallout from the Fed and the Bank of England hiking swiftly.

“It is too early to talk about the ECB,” said George Saravelos, Deutsche Bank’s global head of currency research. “Yes, European wage growth may rise and the ECB may lift off over the next two years. But the pressure and urgency to do so in Europe is completely different.”

A bond buffer will be particularly welcome for indebted countries like Italy and Greece.

ECB President Christine Lagarde knows all too well how easy it is to rock markets, having sent peripheral yields spiking in early 2020 with a loose remark.

While government debt yields have risen globally as markets brace for the removal of central bank support, German yields are up this year by only about half the amount as comparable U.S. or U.K. debt.

And German 10-year borrowing costs are still below zero, versus about 1.8% in the U.S.

That reflects the gaping policy divide, with about five Fed hikes priced in for this year. While the ECB will reduce total asset purchases this year, and end its pandemic program, policy makers have stressed that a 2022 rate hike is unlikely.

Lagarde defended that position this month, and it’s expected to be reiterated when ECB officials meet on Thursday.

Recent data, showing weaker euro-area economic confidence, and Germany on the brink of a recession, will only reinforce the caution.

To alter the timing, bond buying would have to be wound down faster because the ECB’s guidance is that net purchases will end before rates start to rise. Such a move would have to be telegraphed well in advance to avoid market upset.

So far, the strategy has worked. The yield differential between Italian and German debt -- a harbinger of risk in the region -- has widened since October on the ECB’s plans to scale down its bond-buying programs.

Yet it’s stabilized this month and remains well below historical stress levels. A resolution to Italy’s ongoing presidential election could even see the spread tighten.

The Fed-ECB divergence has also driven the euro down to around $1.11 against the dollar, the lowest since mid-2020. Options sentiment remains bearish, suggesting the descent could have further to go.

While euro-zone inflation reached a record 5% last month, policy makers argue it will slow this year. The ECB currently forecasts price growth at 1.8% in both 2023 and 2024 -- just below its 2% target.

Some are predicting an ECB hike as soon as December, and money markets are also toying with that idea. Volatile swap contracts currently suggest around 20 basis points of tightening is priced for the end of 2022. While they may not be an accurate gauge, they do suggest some market participants are hedging for faster normalization.

“I still think there is a chance the ECB is pulled into a more aggressive stance,” said Brad Bechtel, global head of foreign exchange at Jefferies. “Although we are now open for a move to $1.10, I would be a buyer down there on the back of an eventual shift by ECB.”

For now, that remains a tail risk for later in the year, and there’s too much uncertainty for the ECB.

“The ECB and the euro-zone economy are still lagging behind the Fed and the U.S. economy in terms of the cycle, inflation, wages and labor market tightness,” said Carsten Brzeski, global head of macro at ING. “The bank will have to confirm its new hawkishness without sounding too hawkish. If market expectations surge too quickly, higher interest rates could undermine the economic recovery.”