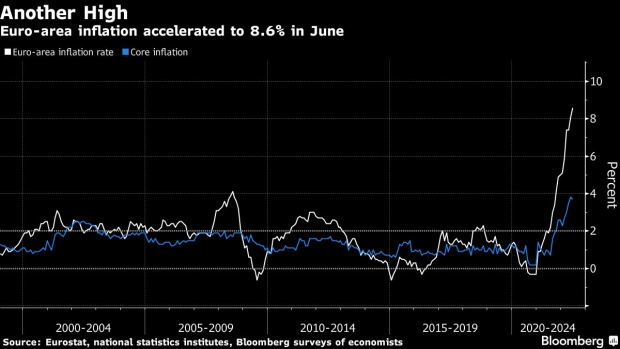 The European Central Bank’s bid to engineer its first interest-rate hike since 2011 without causing the euro to splinter is about to take on new momentum.

Now officials have seen June’s record inflation reading, judged to be pivotal for their next monetary move, they’ll convene Wednesday for the final scheduled opportunity to prepare for their two-day meeting starting July 20.

With all the major euro-zone data out in the open, and key gatherings including an annual retreat out of the way, policy makers can focus on haggling over the size of rate hikes and the design of an anti-crisis measure.

The question of 25 or 50 basis points -- already controversial -- would have been the main issue by now were it not for an outbreak of Italian debt turmoil that forced ECB President Christine Lagarde to hold emergency talks and extract a pledge for a new tool.

A whole tightening cycle that officials have dreamed of for years and talked about for weeks rests on their ability to act without giving investors cause to doubt the ability of weaker euro members to take a hit to borrowing costs, endangering the single currency.

Raising rates would allow the ECB to play catchup at a time when much of the world is already far advanced. That includes the US Federal Reserve, which markedly accelerated action last month with its biggest hike since 1994.

The ECB has sought to prepare markets for this moment, having announced already in June details on planned rate increases in July and September -- with more to follow after that.

Lagarde reiterated to the annual gathering in the Portuguese resort of Sintra last week that the intention is to start with a quarter-point on July 21. Pierre Wunsch, the hawkish head of Belgium’s central bank, described such a move as a “done deal.”

But colleagues from the Baltic states have suggested a bigger hike, if the inflation backdrop deteriorates.

If data point to “the persistence of inflation, to its acceleration, 50 basis points should be a policy option for July,” Lithuania’s Gediminas Simkus told Bloomberg last week.

Whether that materialized in Friday’s reading of 8.6% -- a fresh above-consensus record -- is likely to be a matter of debate. The median economist estimate has been surpassed in every month but one in the past year.

At the same time, a gauge of underlying inflation, excluding energy and food, inched down to 3.7% in June. Investors also are growing increasingly concerned that a slowdown in the economy could prompt policy makers to take a more hesitant approach on rate hikes.

German two-year yields -- which are the most sensitive to changes in interest rates -- halved on Friday from a peak of 1% set earlier last week and while money markets are clinging on to wagers for 75 basis points of hikes by September, they have slashed bets on how much further tightening is necessary. Traders are now betting the deposit rate will rise to 1.5% by the end of next year, a one-point drop compared to two weeks ago.

“We expect a 25-bp hike in July, followed by a 50-bp move in September and 25-bp increases in October and December. The fear of persistent inflation has trumped worries of recession -- hawks on the Governing Council are winning the debate.”

The discussion on rates would be hard enough without inventing a persuasive crisis-fighting tool in tandem, which policy makers pledged after an emergency meeting on June 15.

The exact design isn’t clear, though the legal imperative of avoiding monetary financing is an overarching constraint. Staff are drumming up proposals to present to the Governing Council.

Policy makers in Sintra emphasized two key elements. The first is that it should be so convincing that the ECB won’t need to use it -- reminiscent of the OMT tool heralded by former President Mario Draghi a decade ago this month.

Wunsch repeated the label of a “backstop instrument” in an interview last week, saying that “it’s hard to think about unwarranted fragmentation that would justify us being present in the markets on a permanent basis.”

Secondly, the tool should ensure the ECB isn’t adding liquidity that would counteract efforts to tighten monetary policy. There are different ways of achieving this, though officials have used the term “sterilization” to describe that requirement.

To keep financial markets at bay until the measure is unveiled, the ECB is flexibly reinvesting maturing bonds in its pandemic purchase program. That measure went live on Friday, though it’s not clear whether any purchases have ensued.

In the meantime, with this being the final full week before a pre-decision blackout period, appearances by officials may draw interest, including Lagarde herself on Friday. The minutes of the ECB’s June meeting are published a day earlier.

Whatever they say, though, the ECB is as determined as it could be to finally begin rate increases, with only something as major as a geopolitical shock able to derail that.

“If we are still in an environment without a deep recession and year-on-year growth being positive, I think the first 200 basis points are a no-brainer,” Wunsch said.