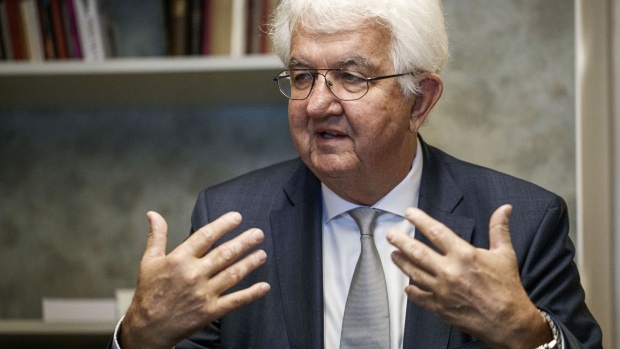 Robert Holzmann, governor of Austria's central bank, gestures during an interview in Helsinki, Finland, on Friday, Sept. 13, 2019. Holzmann said the easing package approved by the European Central Bank on Thursday was possibly a mistake and can be changed after incoming President Christine Lagarde takes over from Mario Draghi. Photographer: Roni Rekomaa/Bloomberg , Bloomberg

(Bloomberg) -- A 100 basis-point increase in interest rates by the European Central Bank would be “currently too much,” according to Governing Council member Robert Holzmann, who favors a three-quarter-point step next month.

Speaking in Brussels, Holzmann said officials are ready to raise borrowing costs to levels that may hamper economic growth as they seek to tame unprecedented inflation. Elevated price gains are likely to persist for a while, he said, with analysts anticipating another record near 10% when September’s reading is published this week.

“50 may be the minimum” rate move at October’s meeting, Holzmann told Bloomberg Television later Wednesday. “Could it be 100? It could but I don’t see the necessity now to go as fast. I think 75 would be a good guess.”

ECB officials are poised to decide on whether to repeat this month’s historic three-quarter-point hike -- a scenario that’s currently fully priced in by money markets. While the quickest inflation since the euro was introduced may justify such a step, the increasing danger of a recession has prompted some to urge caution.

Holzmann said the ECB is still “some way” from the neutral rate of interest, which neither stimulates nor restricts economic activity and is estimated by analysts to be somewhere between 1% and 2%. He said bringing the deposit rate to 2.5% from 0.75% at present would definitely take it beyond neutral.

The Austrian official, the ECB’s top hawk, warned that fiscal aid to help households through the spike in energy costs shouldn’t interfere with efforts to bring inflation back to the 2% target. He urged governments to focus support on the weakest in society and said he prefers energy-saving measures to price caps.

Holzmann said shrinking the trillions of euros of bonds accumulated by the ECB during recent crises is part of the normalization process, and that so-called quantitative tightening will be discussed at a non-monetary-policy meeting next week in Cyprus.

(Updates with more comments from Holzmann starting in third paragraph.)