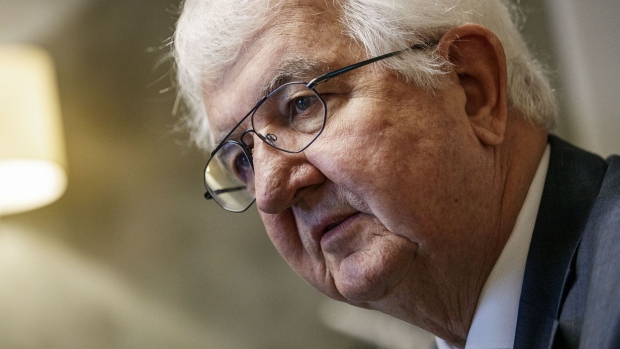 (Bloomberg) -- The European Central Bank may decide to only put its 1.85 trillion-euro ($2.1 trillion) pandemic bond-buying program on hold rather than abolish it after net purchases are set to end in March, according to Governing Council member Robert Holzmann.

The program, which was launched in 2020 to address the pandemic shock and fragmentation on euro-area bond markets, could enter a “waiting room” rather than be terminated as the ECB’s crisis response moves into a new phase, Holzmann said at a news briefing in Vienna.

This will be in order to “save the advantages of flexibility in case they become necessary in the event of economic shocks, which are definitely possible, but we do not expect,” he said.

At issue is the question whether the ECB should hold on to the versatility of its crisis tools even after it shifts its focus on more conventional instruments. The additional flexibility that allowed the central bank to calm investors’ nerves during the outbreak could still be needed in case of further economic setbacks, Holzmann said.

Executive Board member Isabel Schnabel said in an interview this week that leaving the pandemic “will be a process.” She also suggested that the pandemic program, known as PEPP, will continue to play a role even if the ECB decides in December to halt net buying at the end of March, as currently foreseen.

Uncertainty over the economic outlook has increased after a spike in Covid-19 infections in a number of euro area countries is threatening to undermine the recovery. At the same time, inflation is running the fastest level since 2008 and may accelerate further, putting pressure on policy makers to reconsider their loose policy stance.