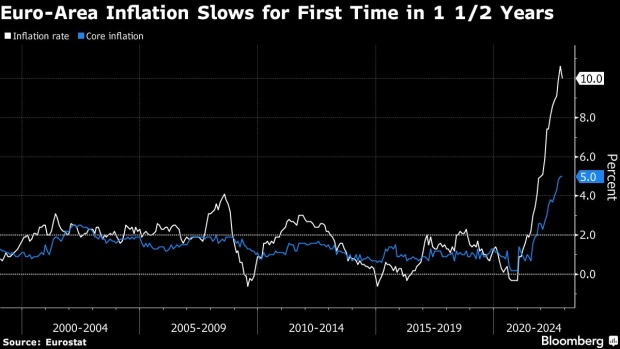 Peter Kazimir, governor of Slovakia's central bank, poses for a photograph with his pet dog following an interview in his office in Bratislava, Slovakia, on Thursday, Sept. 19, 2019. Mario Draghi’s stimulus package buys some time for his incoming successor, Christine Lagarde, to settle in to her new role as European Central Bank president, according to Kazimir. Photographer: Christian Wind/Bloomberg , Bloomberg

While November’s slowdown to 10% was welcome, it’s too early to declare that the worst of the unprecedented spike in prices is over, Kazimir said in an interview. With any euro-area recession likely to be short-lived and inflation to stay above-target even in 2025, officials should quickly raise rates to a level that brakes economic activity, he said.

“It was a pleasant number last month, but I’m afraid it would be too soon to celebrate an inflation peak,” Kazimir said Wednesday in Bratislava. “It wouldn’t be right to slow down the monetary tightening because of a single better inflation number. I still see many reasons to continue in the set pace of policy tightening.”

The comments are among the strongest in support of persisting with jumbo moves in borrowing costs when the ECB meets on Dec. 14-15. Expectations have been building for the ECB to ease its recent pace of hikes to a half-point, a downshift that’s being aided by a less aggressive Federal Reserve.

Despite slowing, however, inflation in the 19-nation euro area remains five times the 2% goal. And Kazimir, one of its more hawkish officials, has seen consumer-price growth hit a record 14.5% in his homeland of Slovakia, where he heads the national central bank.

Speaking a day before the quiet period preceding ECB rate meetings kicks in, Kazimir said workers remain scarce and there are signs of the economy being more resilient than previously thought. A euro-zone downturn on the back of surging energy costs will probably turn out to be “a technical and a short-term recession,” he said.

“That’s one of the reasons why we should have courage to make another step of a similar size” as previous meetings, Kazimir said. “I would prefer a step that would move us to the restrictive-policy phase in a way that would be relatively painless.”

New economic projections due next week from the ECB staff will offer a first look at 2025, when Kazimir expects inflation to be approaching the target but still above it.

Aside from interest rates, officials will also discuss how to start rolling off the roughly €5 trillion ($5.3 trillion) in bonds bought as part of stimulus measures in recent years, a process known as quantitative tightening.

“QT is inevitable, I don’t think there are any doubts that it will happen,” Kazimir said. Echoing comments from some of his colleagues, he called for balance-sheet reduction to be conducted “in a transparent and gradual manner” to ensure “it’s predictable and won’t increase market uncertainties.”

The Slovak official, who’s led the central bank since 2019 and was finance minister before that, is currently facing allegations of bribery by national authorities. Previous charges were dropped earlier this year. Kazimir repeated that he rejects any wrongdoing and that he has no doubts that he’ll prove his innocence.