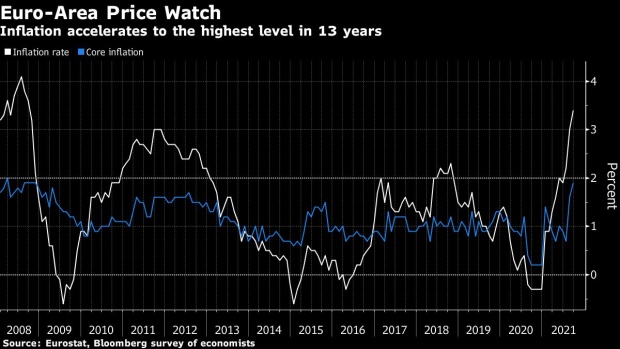 “Risks for headline inflation are again tilted to the upside,” Knot said in a webinar on Thursday. “Upside risks, in the short to medium term, are mainly linked to more persistent supply side bottlenecks and stronger domestic wage-price dynamics.”

The Dutch governor added that investors appear to be taking the possibility of higher inflation seriously, and that after a period of setbacks and the threat of deflation, “this is good news.”

Knot’s comments precede a major debate at the ECB as it prepares for a transition to post-pandemic stimulus at a time when global counterparts increasingly focused on the threat of a price spiral are removing support. The institution is expected to announce the next steps for its emergency bond-buying program in December.

Consumer prices in the 19-nation currency bloc are currently increasing at an annual pace of 3.4%, far faster than the ECB’s 2% goal. Officials have insisted that the spike is largely transitory and related to supply shortages as global economies reopen.

Some ECB policy makers -- including Knot -- have recently started to warn that price pressures could become more persistent, setting the scene for an intense discussion on the future of stimulus.

“The ECB’s current baseline scenario is consistent with ending the pandemic emergency purchase program in March 2022,” Knot said. “This does not, however, mean the end of loose monetary policy.”

Knot said that the central bank’s efforts to create a durable inflation trend may imply exceeding 2% for some time, but he added that it would not be “proportional to use asset purchases to actively strive for such an overshoot.”

“So far, there is no evidence of significant second-round effects through wages and inflation expectations in the euro area remain anchored,” she said.