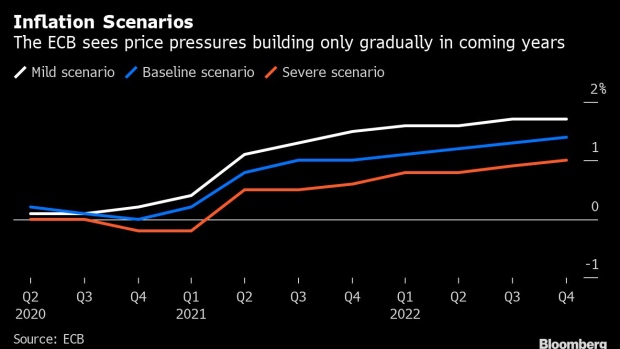 Christine Lagarde, president of the European Central Bank (ECB), is displayed on a laptop computer, beyond a 20 Euro banknote, during a live stream video of the central bank's virtual rate decision news conference in Frankfurt, Germany, in this arranged photograph in London, U.K., on Thursday, June 4, 2020. The ECB intensified its response to the coronavirus recession with a bigger-than-anticipated increase to its emergency bond-buying program. Photographer: Bloomberg/Bloomberg , Photographer: Bloomberg/Bloomberg

(Bloomberg) -- European Central Bank President Christine Lagarde said the euro zone faces about two years of downward pressure on prices, but could see a turnaround after that because the coronavirus crisis will accelerate the transformation of the economy.

The ECB head said in a webinar on Saturday that the pandemic will spur the preexisting shift toward greater digitization and automation, shorter supply chains, and greener industries.

In the meantime, the central bank will need to keep its monetary policy exceptionally loose, and financial instruments will need to be developed that allow the economic transformation to be funded, she said.

“The transition to new economic models will be disruptive -- they will probably be more disruptive in the first two years, obviously hitting employment and production -- and then we can hope it improves productivity,” Lagarde said. “So the inflation dynamic will necessarily be impacted, probably with a disinflationary, deflationary aspect at first, and then an inflation dynamic.”

The president said the ECB estimates that supply chains will shrink by around 35% and use of robots will increase by between 70% and 75%. She also noted an increase in online retail payments since the start of the year, and called on the European Union to develop a single digital market.

Still, she warned that pandemics typically increase inequality, with economic and social consequences that the central bank will have to take into account.

On the topic of how the ECB will help fight climate change -- a potentially controversial point for monetary officials, who are wary of taking on tasks they believe governments should handle -- Lagarde referred to her battles in her previous role as head of the International Monetary Fund.

“I am determined to have the same debate with governors at the ECB to ensure that in all areas, climate risk and biodiversity is taken into account,” she said. “We won’t do it in one day, but we must question in every domain, stress test by stress test.”

On carbon pricing, she doubted whether a fair rate of around $70-80 a ton could be rapidly introduced, but said the cost of carbon pollution must be integrated in “gradual and determined way.”

A gradual increase combined with border taxes on goods imported from countries that don’t accept the same constraints on carbon pricing would would be an “excellent solution,” she said.

On the same panel, UBS Group AG Chairman Axel Weber, a former ECB policy maker, said a market system based on a single carbon price is needed to remain consistent with the objective to maintain global warming below 2 degrees celsius.

“The current fragmented approach is not working,” he said.