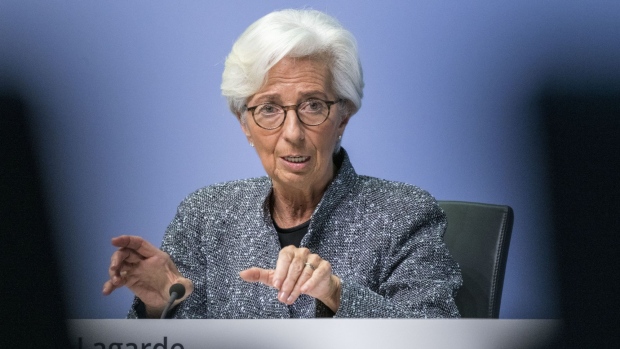 New restrictions being rolled out across the euro area to curb the surge of infections will increase uncertainty for companies and families, European Central Bank President Christine Lagarde said.

The lop-sided impact that the pandemic has on services is particularly worrying as the sector accounts for 75% of employment in the 19-nation region, she said. That may slow the recovery and increase inequality.

“The recovery remains uncertain, uneven and incomplete,” Lagarde told a panel discussion with heads of central banks from the U.K., China and Japan. “It is clear that both fiscal support and monetary policy support have to remain in place for as long as necessary and ‘cliff effects’ must be avoided.”

The remarks underscore policy makers’ growing concern about the pace of recovery. Weaker spending on consumer goods in the summer months suggested that there isn’t much pent-up demand, meaning sales lost are unlikely to be made up at a later point.

Less than two weeks before the ECB’s next policy meeting, the outlook for the euro-area has been growing rapidly worse after countries imposed curfews and other restrictions to stop the spread of the virus.

While officials have reasons to delay a decision on increasing their 1.35 trillion euro ($1.6 trillion) emergency bond-buying program, Executive Board member Fabio Panetta said on Saturday new curbs put the recovery further from reach.