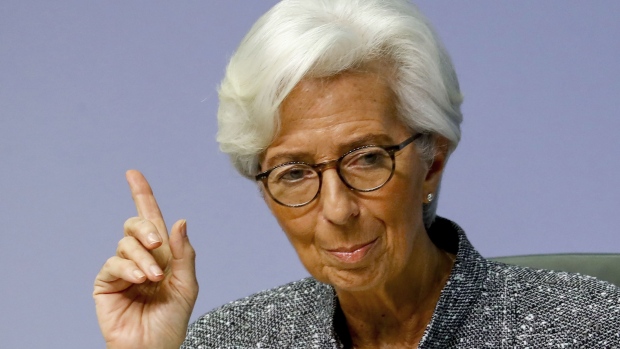 Christine Lagarde, president of the European Central Bank (ECB), gestures during the central bank's rate decision news conference in Frankfurt, Germany, on Thursday, March 12, 2020. Lagarde urged governments to stop dithering in their economic response to the coronavirus as she warned that the outbreak already constitutes a “major shock” to global growth prospects. , Bloomberg

European Central Bank President Christine Lagarde said the unexpectedly early pickup in coronavirus infections is a “clear risk” to the economic outlook, in a sign that policy makers are gearing up for more monetary stimulus.

“Most scientists in the euro zone were expecting the resurgence of the epidemic in November or December, with the cold,” Lagarde said in a pre-recorded interview with France’s LCI on Tuesday evening. “It’s come earlier, and from that point of view that has surprised. It’s not a good omen.”

The remarks were broadcast hours after ECB chief economist Philip Lane told Germany’s RTL that while the virus might still be contained, “we have to prepare for worse scenarios” if it can’t.

The ECB’s Governing Council will meet next week to set monetary policy, though economists and investors largely expect it to wait until December before boosting its 1.35 trillion-euro (US$1.6 trillion) pandemic bond-buying program. That’s when officials will have updated projections for growth and inflation that could justify more action.

The Bank of England is likewise predicted to increase its bond-buying program when it meets early next month and publishes its own revised forecasts.

In a blitz of public appearances since the ECB’s previous meeting in September, policy makers have repeated the official line that they’ll add stimulus if necessary, but have differed on whether they see such a need.

Bank of Spain Governor Pablo Hernandez de Cos said earlier on Tuesday that there’s no room for complacency and “we can’t rule out that we might need to recalibrate previous measures or introduce new ones if necessary.”

Yet Austrian central-bank chief Robert Holzmann said on Monday that he doesn’t yet see the need for more monetary support.

Lagarde touched on such disagreements in her interview, saying that they reflect different cultures, assessments of the outlook, and opinions on the roles of monetary and fiscal policies -- but that those differences are settled.

“What is extraordinary is that points of view are expressed, sometimes confront each other, and figures are compared and at the end of the day we get to a position that is the collective position,” she said.

She also reiterated her call for governments to work hand-in-hand with the central bank to salvage the economy.

“We are in a massive transformation of our economies, and I think it is very important that fiscal policies, monetary policies, but above all, structural developments, have a common cause,” she said. “It won’t be very easy.”